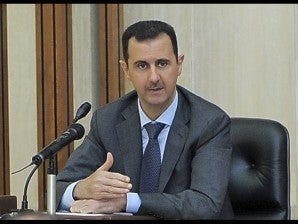 AMMAN — Britain and Qatar urged President Bashar al-Assad to step down, as major world powers gathered on Wednesday to seek ways toward a peaceful end to Syria’s conflict.

And the United States urged Assad to make a “commitment to find peace” in a country whose conflict has killed more than 94,000 people and threatens to spill beyond its borders.

“It is the longstanding view of the UK that Assad needs to go, and we have never been able to see any solution which involves him staying,” British Foreign Secretary William Hague said in Amman ahead of a Friends of Syria meeting to discuss a US-Russian proposal for peace talks.

Qatar, a key supporter of the Syrian opposition, echoed that.

“A political solution must be reached to end the conflict and meet the aspirations of the Syrian people who, as we know, demand changing the regime and changing President Bashar al-Assad, who insists on killing his people,” Sheikh Hamad bin Jassem al-Thani said in Doha.

The United States and Russia, which back opposite sides in the conflict, earlier this month proposed a peace conference dubbed Geneva 2 to bring together rebels and representatives of Assad’s regime.

The aim of the conference, Hague stressed, would be to agree on the formation of “a transitional government with full executive authority, formed on the basis of mutual consent.”

After initial uncertainty, the acting head of Syria’s opposition National Coalition is to be represented at the meeting in the person of its interim president, George Sabra, a coalition spokesman said.

Syria’s ambassador to Jordan, Bahjat Suleiman, lashed out at the meeting, describing it as a gathering of “enemies of Syria,” and insisted that Damascus was “defending itself.”

He said the issue would be discussed with the opposition later on Wednesday.

At a pre-meeting news conference, US Secretary of State John Kerry said Geneva 2 would seek “to end the bloodshed what has cost tens of thousands of lives.”

“We would call on President Assad to make the same commitment to find peace in his country.”

Earlier, a top US official, urging the opposition to close ranks, said “one of the things we’ll be talking about here in Amman… is what else needs to be done with respect to the military balance on the ground.”

Speaking of an existing arms embargo on Syria, Hague said: “The decision we need to take in Europe in the next days is about the rules of this embargo. Decisions about sending lethal equipment (to the rebels) is a different matter.”

While the regime has reportedly already proposed the names of several potential envoys to the mooted Geneva conference, the opposition has yet to decide whether it will attend.

The Coalition is to meet later this week in Istanbul, where it is expected to hammer out its stance on the peace effort and take decisions on its leadership.

The diplomatic drive comes against the backdrop of a major push by Syrian regime forces and its allies to retake the rebel stronghold of Qusayr in central Homs province bordering Lebanon.

The battle for the town, which lies between Damascus and the Mediterranean coast, is drawing in neighboring Lebanon, with the country’s powerful Shiite movement Hezbollah dispatching fighters to bolster regime troops.

Syria’s opposition urged fighters across the country to “rush to the rescue” of Qusayr and appealed to the international community to set up a humanitarian corridor to the embattled town.

“The Syrian regime is receiving help from Hezbollah and Iran. That’s an increasing threat to regional stability,” Hague told reporters.

“If the regime were to think they can win a military victory and goes back to whatever was normal before, I think they will be making a terrible error, a catastrophic error. They need a political solution.”

The battle in Qusayr has raised tensions in the Sunni-majority Lebanese town of Tripoli, home to a minority of Alawites, the Shiite offshoot to which Assad belongs.

As the Qusayr offensive began on Sunday, clashes erupted in the northern Lebanese city of Tripoli. At least 11 people have died since then.

On Tuesday, the Syrian Observatory for Human Rights said more than 100 people had been killed in the fighting in Qusayr since the assault started, including 31 Hezbollah fighters, 70 rebels and nine soldiers.

The group says a total of over 90,000 people have been killed since the Syria conflict began in March 2011.