BINAY ON BINAY  Vice-President Jejomar Binay tells the media why her daughter Nancy is fit for her new job as Senator of the Republic. Video by Ryan Leagogo/INQUIRER.net

MANILA, Philippines — “Prove them wrong” was what Vice President Jejomar Binay advised his eldest daughter Nancy whose election as senator out of nowhere has made her the subject of “vicious” criticisms. 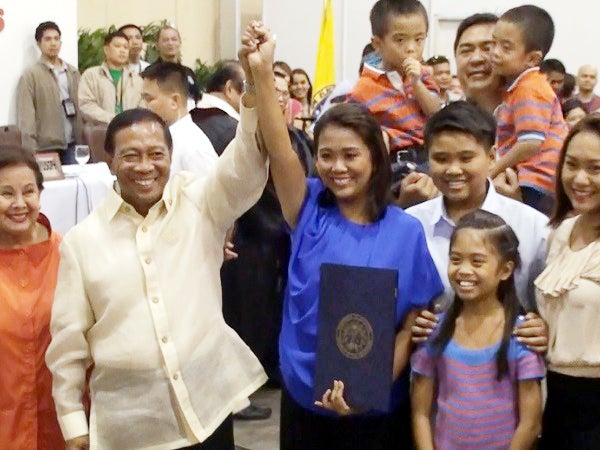 ALL IN THE FAMILY Vice President Jejomar Binay raises the hand of his daughter, Nancy, after her belated proclamation by the Commission on Elections, sitting as the National Board of Canvassers (NBOC), at the Philippine International Convention Center Saturday, May 18, 2013. Nancy Binay, who placed fifth, was a no-show in Thursday’s proclamation of the other winners in the top six. RYAN LEAGOGO/INQUIRER.net

“Prove them wrong. You will have to deal with misgivings and personal attacks but just pray and prove that none of the things they are saying are true,” he told the younger Binay during her belated proclamation Saturday by the Commission on Elections, sitting as the National Board of Canvassers, at the Philippine International Convention Center (PICC).

Despite being at the receiving end of personal attacks, his daughter, a candidate of the United Nationalist Alliance (UNA), placed fifth in the Senate race.

Binay was scheduled to be proclaimed Thursday alongside five other senators-elect who composed the first half of the “Magic 12” but declined the invitation, wanting “every vote” to be counted first.

The NBOC finished proclaiming all twelve winners by Saturday night, after canvassing only 129 of 301 CoCs.

Binay who, since starting her campaign in February, was a favourite topic on Facebook and Twitter due to her lack of experience, said she has not read the criticisms “or that would have made me sad”.

“The elections are done, what more do they want from her?” the vice president asked.