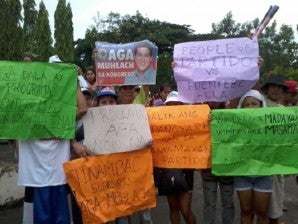 Supporters flock at the municipal hall of Tigaon, Camarines Sur to show support to actor Aga Muhlach, a candidate for representative of the province’s fourth district.INQUIRER PHOTO/LOEN MAY GONZALES/INQUIRER SOUTHERN LUZON

CAMARINES SUR – William “Wimpy” Fuentebella won the biggest challenge so far faced by the Fuentebellas in their own turf, narrowly holding on to the Partido district in Camarines Sur which their family has controlled politically for a century.

Fuentebella was proclaimed winner by the provincial canvassing board Thursday night in the hotly contested fourth district congressional race, garnering 82,834 votes, or a margin of 2,205 votes, over actor Aga Muhlach’s 80,629 votes.

Muhlach, however, refused to concede and filed before the Commission on Elections main office in Manila a petition to annul Fuentebella’s proclamation at 2 p.m. Friday.

In his petition, Muhlach asked the Comelec to annul and set aside the certificate of canvass (CoC) in the province’s fourth district and the proclamation of his rival.

Muhlach asked the Comelec to declare failure of elections in Camarines Sur, saying election returns from several areas were not transmitted due to “corrupted” compact flash (CF) cards of the precinct count optical scan (PCOS) machines.

In Tigaon town, Muhlach said the board of election inspectors (BEI) were unable to print election returns.

He said the BEI tried to fix the problem, but the CF cards were supposedly found to be corrupted and thus could not transmit election results.

A total of 668 registered voters cast their votes in the affected polling precincts, he said.

Muhlach further alleged that in several other areas in Camarines Sur, there were PCOS machines that shut down and failed to transmit election results.

There were also about 80 ballots that were rejected by the PCOS machines in various clustered polling precincts, he said.

Apart from technical glitches, the actor also cited reports of violence and intimidation that affected the outcome of the elections.

Lawyer Howard Calleja, counsel for Muhlach, said by phone Friday they believed Fuentebella’s proclamation was illegal and invalid since there were still uncounted votes from precincts in Tigaon, Siruma and Sagnay towns that were excluded in the canvassing by provincial canvassing board.

He said the total number of ballots in the uncounted election returns was estimated to be over 3,000 votes.

He likewise raised the allegation of cheating, saying there were alleged discrepancies in the counting of votes, as a basis for asking the Comelec to conduct new elections in the questioned precincts.

Fuentebella refused to answer questions from reporters on allegations of cheating when he was interviewed following his proclamation Thursday night.

He ignored the reporters asking the question as he briskly walked to his waiting car.