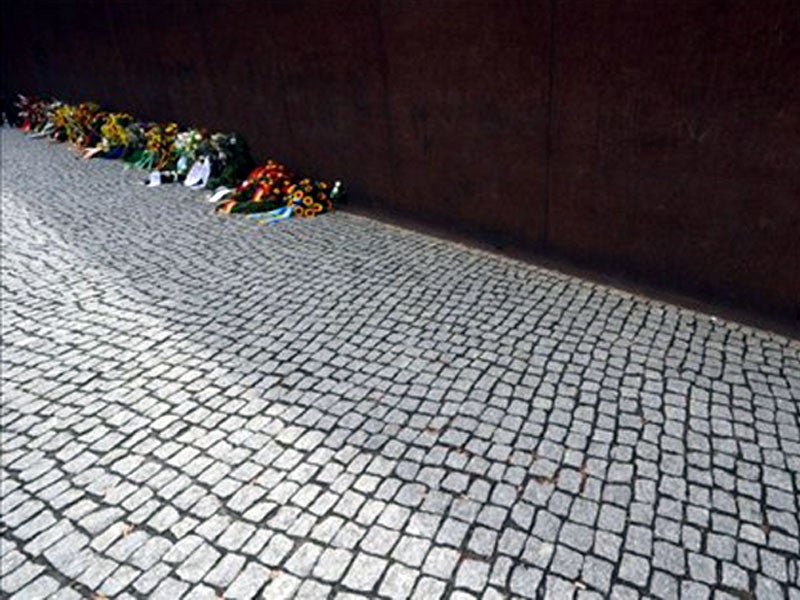 BERLIN—Berlin on Saturday marked the 50th anniversary of the day the Berlin Wall started to go up with a memorial service and a minute of silence in memory of those who died trying to flee to the West.

German President Christian Wulff, Chancellor Angela Merkel, who grew up in the East, and Berlin mayor Klaus Wowereit attended a nationally televised commemoration followed by a ecumenical church service at a chapel built where the Wall stood for 28 years.

Flags flew at half mast on the Reichstag (parliament) and church bells tolled at noon as Germans were called to observe a minute of silence in remembrance of the 136 people who are known to have died in Berlin between 1961 and 1989 while trying to cross the Wall.

Overall figures of those killed while attempting to flee from East to West Germany stand at between 600 and 700.

“No one knows the true figure,” Wulff told those attending the commemoration in Berlin’s Bernauer Strasse, the scene of many escape attempts which today houses a memorial visited by half a million people every year.

“We bow our heads in remembrance of all who died at the Wall and of the hundreds who died on the inner German border,” he said.

“The dead and wounded, the hundreds of thousands who were imprisoned and politically harassed aren’t the only victims of this Wall.

“Millions were also forced to renounce the lives they wanted to live,” he added.

“The Wall was part of a dictatorial system, an unjust state,” Wowereit said for his part.

“It illustrated the bankruptcy of a system people wanted out of.

“The Wall is now history, but it must not be forgotten.

“It is our responsibility to keep its memory alive and pass it on to future generations … so that such injustices never repeat themselves,” he added.

The commemorations began overnight at a chapel on the former death strip with a more than seven-hour-long reading of the names and stories of those killed seeking freedom.

These included Ida Siekmann, 58, the first known Berlin Wall victim who fell to her death when jumping to the West from the third storey of a building on August 22, 1961.

And Chris Gueffroy, 20, the last victim, shot dead on February 6, 1989 — nine months before the Wall fell — while trying to swim across a canal.

The Wall was born in the early hours of Sunday August 13, 1961, a day chosen by East German authorities as that most likely to catch people by surprise as they enjoyed a summer day off.

In a secret operation code-named “Rose”, tens of thousands of East German soldiers and factory militiamen were called out to cut off the Soviet-occupied eastern sector from the western part of the city, occupied by US, British and French forces since the end of World War II.

The Wall, known in the East as the “anti-fascist protection wall”, was set up to stop the exodus of East Germans who found it easy to cross into West Berlin and then fly on to the West rather than attempt to cross the inter-German border farther afield.

In 1961, more than 2.5 million of East Germany’s 19 million inhabitants had already voted with their feet by going West and, with up to 3,000 leaving every day, communist authorities feared the mass flight would bleed the state dry.

Soldiers blocked off the streets, cut off rail links, and began building a wall of barbed wire and cemented paving stones which over the years, in Berlin, grew in height and complexity over 155 kilometers (96 miles).

Today much of the Wall has disappeared with only small portions, totalling about three kilometers, remaining.

Sections still standing, where numerous wreaths were laid on Saturday, are now being restored and listed for historical preservation.

For days, German newspapers and television channels have been marking the upcoming anniversary with interviews of people who tried to cross the Wall and programs and documentaries about its history.