PPCRV eyeing to wrap up unofficial, parallel count but… 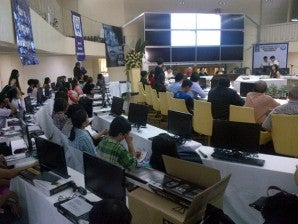 MANILA, Philippines — As the top half winners of the senatorial race will most likely be proclaimed Thursday evening, the Parish Pastoral Council for Responsible Voting (PPCRV) is eyeing to wrap up its unofficial, parallel count.

But that still depends on whether the Comelec will approve the United Nationalist Alliance (UNA) motion to defer partial proclamations of the senator-elects, said PPCRV chair Henrietta De Villa.

“If they approve the motion of UNA to defer proclamation, there will be no proclamations at all today (Thursday) until there are arguments taken regarding that motion,” said De Villa on Thursday.

But if Comelec nixes UNA’s plea, the PPCRV will suspend its real-time count because the Comelec “will suspend momentarily the transparency server during entire time of proclamation.”

But the moment the winners of the senatorial races have been proclaimed, “we can resume again getting data from the transparency server.”

PPCRV made it clear, though, that the manual encoding by its volunteers of the pre-transmission election returns will “continue because this has nothing to do with the suspension of the server.”