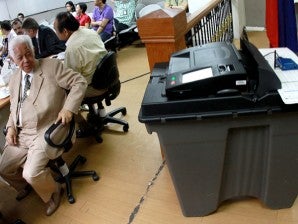 MANILA, Philippines—Commission on Elections Chairman Sixto Brillantes Jr. on Thursday took a swipe at critics “with dirty minds” for questioning the integrity of the midterm elections following glitches that slowed down the consolidation of municipal and provincial election results.

He said “outsiders full of doubts and speculations” were making baseless claims by alleging widespread irregularity in the direct transmission of results to the Comelec’s transparency server, from which partial, unofficial results were taken.

Brillantes said the quick count of partial unofficial election returns yielded by the transparency server, which the Parish Pastoral Council for Responsible Voting and the media were using, was not the same as the official canvassing of votes under a “ladderized,” or tiered, system by the National Board of Canvassers (NBOC). Under the “ladderized’ system, the results are first transmitted from the precincts to the municipal tabulation centers then to the provincial centers and on to the NBOC.

Brillantes clarified that the signal problem affected only  direct transmissions to the transparency server.

“But the signal problem will not affect the NBOC’s canvassing because we have contingency measures there,” he said. For instance, “if there can’t be transmission, we [physically] take the CF (compact flash) cards to the NBOC.”

“The official [canvassing] is different from the [results from the] transparency server. The transparency server might still be missing the 30 percent of the vote, but with the NBOC, the gap is not as large,” he said without elaborating.

Asked about the possibility of switching of CF cards, Brillantes turned the tables on the critics, saying they had dirty minds.

“That’s true. Those with dirty minds will think that way. But the watchers are all there. What CF-card switching? Here we go again. We go back to the outsiders full of doubts and speculations,” he said.

He noted the presence of watchdogs, including the National Citizens’ Movement for Free Elections, in the canvassing places.

Brillantes said the Comelec would hold the technical provider, Smartmatic International, “for any errors they committed.”

“We have a contract [with] them. But so far I have not seen any errors,” he said.

He stressed that the slowdown in the releasing of results from the transparency server was caused by a number of factors, including weak signal in the provinces and the fact that some precincts stopped or failed to transmit to the server after transmitting the returns to the municipal board of canvassers.

Flores said the Comelec and Smartmatic were not even legally bound to have the transparency server yield 100 percent of the vote, since the only official results would emanate from the ladderized system of canvassing.

“The official basis of canvassing and proclamations is what comes up the ladderized transmission from the municipality, then province, then finally the NBOC,” he said.

He said the bottlenecks at the municipal and the provincial levels of the official canvassing were caused by a variety of reasons, including the fact that the boards of election inspectors in some areas refused to lower the threshold of the percentage of votes for local positions, which the Comelec has allowed.

“We’re talking 7,800 PCOS, right, then we’re talking 1,630 municipalities (and cities), and we’re talking 81 provinces, so there is a natural bottleneck. [For example] this municipality would have to wait for 2,000 PCOS before they can transmit to the provincial,” he said.

Weak signal is also another factor, although the Comelec has employed contingencies, including the use of satellite antennas for the transmission to the NBOC, he said.

“You have a precinct here which is 12 hours away, which has no coverage. They have to wait for a car to arrive. So all these things happen. Even though here you can see 1,800 precincts, these municipal board of canvassers still needs to wait until they can proclaim their mayor and vice mayor,” he said.

Flores insisted that he had observed “no major technical problems” with the hardware, including the CF cards.

“This is the way canvassing is by law. There could be hardware problems, but you don’t know if it’s impacting… it depends on every municipality. But it’s not about hardware or anything like that. It’s about the system,” he said.