Glitches slow down counting of votes 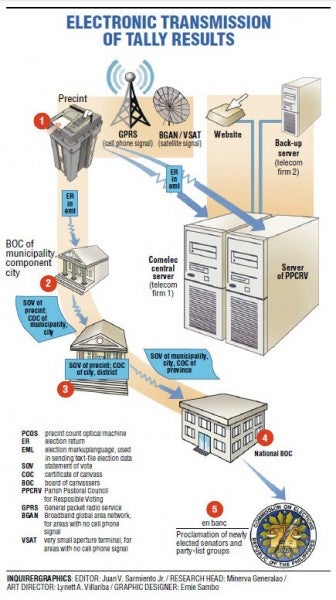 After a spurt in the first hours after the voting ended, the counting slowed, making the tally in the country’s second automated polls move at  snail’s pace and raising questions about the credibility of the results.

“In 30 minutes, [it reached] 20 percent [of the vote]. In one hour, 30 percent. It has even risen to 75 percent,” said Commission on Elections (Comelec) Chairman Sixto Brillantes Jr. But he said that after 75 percent, it “slowed down.”

Brillantes blamed bad telecommunications signals in many areas across the country for the slackening pace of the release of the midterm polls’ initial results.

Besides weak or lack of signals, the National Citizens’ Movement for Free Elections (Namfrel) said the transmission of the results from the provinces to Manila was delayed due to a lack of modems and precinct count optical scan (PCOS) machines that malfunctioned.

The official, who requested anonymity because he was not authorized to speak on the matter, said  many PCOS machines malfunctioned after the backup CF cards were inserted into the counting machines.

“This was the only factor that our election officers pinpointed because these were inserted after the final testing and sealing (FTS) of the PCOS machines. The machines worked during the FTS but after [they did not],” the official said in an interview.

He said his colleagues in other parts of the country also had this problem.

The official said the Comelec main office in Manila issued a “verbal order” on the morning of Election Day to remove the backup cards but the PCOS machines were already “corrupted.”

He said they were waiting for new CF cards from Manila that could be used by their backup PCOS machines.

Because of the “corrupted” PCOS machines, the official said some precincts were not able to submit their results to the municipal canvassing board, which delayed the canvassing at the provincial level.

This in turn delayed the canvassing by the national board of canvassers (NBOC) in Manila because it can tabulate only certificates of canvass (COCs) from the provincial canvassing boards and those from highly urbanized cities.

As of 4 p.m. Wednesday, the NBOC had canvassed only 21 COCs out of the 304 COCs, 106 of which are local, that would be used in the official canvass for the senatorial and party-list elections.

The partial and unofficial “quick count” by the election watchdog Parish Pastoral Council for Responsible Voting (PPCRV) had hardly changed by noon Wednesday from that of Tuesday evening, with results from 69 percent of the total 78,166 clustered precincts counted.

As of 6:21 p.m. Wednesday, the PPCRV had counted electronically transmitted election returns (ERs) from 54,133 precincts representing 69.2 percent of the total precincts.

As the official watchdog, the PPCRV is conducting a parallel partial and unofficial tally based on the returns transmitted to the Comelec transparency server.

The PPCRV relied on the Comelec’s explanation for the slowdown in transmission from the PCOS machines.

“The probable cause, he said, was many of the BEIs (board of election inspectors) of the clustered precincts had a hard time or didn’t try hard enough to transmit the results (from the machines) so they took the flash cards to the city or municipal board of canvassers,” De Villa told  PPCRV volunteers and journalists at the PPCRV headquarters.

Not cause of delays

Brillantes said CF cards were not causing delays in the transmission of COCs from the provincial level to the NBOC.

He said that not all CF cards were “perfect” and that there could be some defective cards.

In Pampanga, former President Gloria Macapagal-Arroyo could not be proclaimed winner as representative of the province’s second district because the election returns in Lubao town had not been transmitted due to a faulty CF card.

Out of 11 towns in the province of Davao Oriental, five failed to transmit election results for canvassing.

“There are other technical issues but it is more of the problems that I mentioned (at the press conference) such as local fights, close contests, that have caused the delay,” Brillantes said.

However, he would not specify what these “technical issues” were as these were “complicated” to explain and might only confuse the public.

Write once, read many

Cesar Flores, president of Smartmatic Asia, the PCOS provider, said there could have been a breakdown of certain PCOS machines because the backup CF card was “write once, read many” and the machines would reject it if it already had elections results written on it.

“So, it might not necessarily be the card, but if the BEI did not follow the instructions in the handbook, it will happen in a couple of situations. It’s actually a security feature of the system … to reject a card if there is already information on the card,” he said.

He added, “That could also be the case, but as of now, you know we need to wait until everything returns to the warehouse so you can do a study.”

Comelec Commissioner Grace Padaca said there was an additional order for 1,500 CF cards “precisely” to address problems encountered on the field.

In a statement, Namfrel said the slow aggregation of electronic results confirmed reports from its volunteers nationwide of “the problems experienced in the transmission of results from the PCOS machines due to several reasons such as lack of modem, weak or lack of signal and the PCOS malfunctioning.”

The watchdog said there were a number of precincts in Makati City that had machines shutting down, delaying transmission.

In Laguna, a number of precincts had to request new PCOS machines due to the “inoperability” of existing machines. In the town of Cabuyao, some of the PCOS machines did not have a seal, causing chaos and confusion in the municipal office, Namfrel said.

It added that the transmission of results was delayed due to the lack of modems at Lakeview Elementary School in Muntinlupa City.

“Parts of northern Luzon—Abra, Baguio City, Tarlac and Bulacan—were besieged with signal weakness. The same issue did not spare precincts in Metro Manila. Volunteers in Makati and San Juan reported problems in the transmission of results to the national servers,” Namfrel said.

It added that at Manila’s Guerrero Elementary School, volunteers tried to pull the PCOS machine out of the precinct to get a better signal, but to no avail. In Surigao del Norte, numerous precincts have given up on their machines and decided to bring their CF cards to the municipal board of canvassers in San Isidro,” Namfrel said.

In an earlier interview, Brillantes said the Comelec was already taking contingency measures in some areas, including the use of the standby broadband global area network or the very small aperture terminal, both of which use satellite technology.