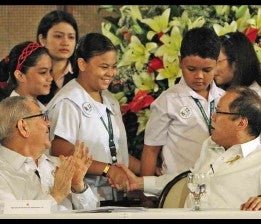 K-12 LAW President Aquino greets schoolchildren who were guests at the signing of the Enhanced Basic Education Act (K-12 Act) in Malacañang on Wednesday. At left is Speaker Feliciano Belmonte. LYN RILLON

MANILA, Philippines—President Aquino signed a law on Wednesday adding three extra years to the country’s 10-year basic education curriculum in a bid to make Filipino students at par with their peers in other countries.

“This lays the foundations for a better future for every Filipino child,” President Aquino said Wednesday after signing the law which makes enrollment in kindergarten compulsory before children can begin the traditional six years of primary school and adds two more years to high school.

The Enhanced Basic Education Act of 2013, or the K-to-12 Act, establishes a “universal kindergarten” and introduces Grades 11 and 12 to high school education in public and private schools.

Students will have to complete the extra education to qualify for university.

Until this law’s enactment, the Philippines was the only country in Asia and one of only three countries worldwide, together with Angola and Djibouti, with a 10-year preuniversity cycle.

“We now know that our traditional 10-year basic education cycle is deficient,” Aquino said at the signing ceremony. “Given that our young people are at a disadvantage in terms of basic education, how can we expect them to compete for employment and other higher pursuits?”

Aquino said Republic Act No. 10533 institutionalizes a system of education that “truly imbues our youth with the skills they need to pursue their dreams.”

“By signing this bill into law, we are not just adding two years of additional learning for our students; we are making certain that the coming generations are empowered to strengthen the very fabric of our society, as well as our economy,” he told lawmakers, Cabinet officials, diplomats and students.

The law, Aquino stressed, was crafted to plug the shortcomings of the 10-year basic education cycle in which students had less time to understand their lessons, and had to compete with better-prepared graduates from other countries.

“If our youth are forced to shoulder such an educational handicap from the beginning, how can they possibly compete for employment in the long run?” he said.

The last two years of senior high school are the new Grades 11 and 12 that will be introduced in 2016. To refine the old curriculum, the law mandates the teaching of basic education in languages understood by the students.—With a report from AFP