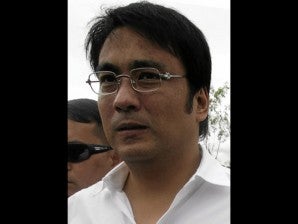 “Maybe more than 50 now. ‘Pag nilapitan mo naman, sasabihin di nila alam bakit sila andito (If you ask them, they will say they did not know where they are here),” Panelo said of the fully armed lawmen.

He said they would file a petition for Writ of Amparo at the Bacoor Regional Trial Court (RTC) that would cite the Department of the Interior and Local Government, the Philippine National Police (PNP) director general, and the regional and provincial PNP for the “intimidation and violence” against the Revillas.

The petition would seek a court order for the immediate pullout of the police, Panelo said in a phone interview.

The tension started early Monday after the police arrested six National Bureau of Investigation (NBI) personnel that Senator Ramon “Bong” Revilla Jr. tapped as additional security for them and their supporters.

Without naming names, Senator Revilla believed the local policemen were taking orders from “higher up” and that the actions were aimed to undermine the candidacy of his son Jolo for Cavite vice governor.

Senator Revilla’s wife and actress Lani Mercado and brother Strike Revilla were also reelected as Bacoor district representative and Bacoor mayor, respectively, with a wide margin of votes over their opponents.

But a police source, who spoke only on condition of anonymity, said the police so-called “operation” was not aimed at Jolo but rather at the senator, who was earlier reported as a potential Lakas standard-bearer for the 2016 presidential elections.

“This is beyond 2013 (elections),” the source said. “Do you think there are still NBI agents inside (the house)? I don’t think so,” he added.

Besides, Estipona said, the 2016 elections were “too far off.”

“The only time our policemen can meddle into politics is when they vote. That’s it, nothing more,” he said.

The police filed a motion for reconsideration at the Bacoor RTC after their earlier application for a search warrant was denied.

“If they’re not hiding anything, why wouldn’t they let us search the house so we could put an end to all these?” asked Estipona, adding that Revilla refused a search when some police officials on Monday noon asked the senator’s permission.

Panelo said the police’s intent to search Revilla’s home, without any basis, would be a violation of his right and an “insult” to Revilla’s sensibilities.