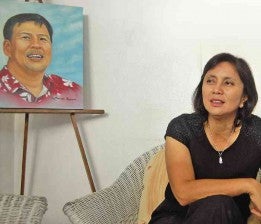 NAGA CITY—It was the morning after Leni Robredo’s big win—garnering about 80 percent of the votes that toppled the Villafuerte clan’s almost 40 years of dominance in the third congressional district of Camarines Sur.

And yet, for Leni, the first order of the day was not to bask in the glory of her victory before a group of cheering campaign volunteers but to do a motherly chore.

Dressed in simple all-black pants and a shirt with  a splash of yellow in her watch strap, Leni, car keys in hand, was getting ready to drive her two daughters to the airport for a flight to Manila.

To most of the people who know her—from the moment she registered in the national consciousness as the calm and collected grieving wife of Interior Secretary Jesse Robredo, who died in a plane crash in Masbate in August last year, and up to the time she became a candidate—she has remained basically the same but with a big difference.

Leni, while essentially still Jesse’s widow and mother of his three daughters, is becoming her own woman.

Now that she has won the fight against a well-entrenched political family, Leni said she was ready to start a new beginning in Camarines Sur politics, guided by the ideals of her husband she longingly described as her “political capital.”

She has yet to be proclaimed winner by the Commission on Elections. The poll body’s unofficial results, posted under its transparency server count, showed that she won in 181 out of the 186 barangays (villages) under the congressional district currently represented by Luis Robredo Villafuerte.

After nine years of being congressman, Villafuerte fielded his wife, Nelly, to replace him. He chose to run for governor but lost to his own grandson, Migz.

Leni garnered 107,496 votes in the unofficial Comelec count against Nelly’s 29,813. She said she did not expect to win with a very big margin and believed it was largely due to her army of campaign volunteers who worked hard despite very limited resources coming from donations.

“In my view, it (victory) is a big message that the people rejected political dynasty. In the beginning, it was a very difficult fight because I am against a well-entrenched family who had been in power since 1978. I know many people have a debt of gratitude to them while the majority of barangay officials are with them. But the people have decided,” she said.

Leni, 48, graduated with a law degree from the University of Nueva Caceres in 1992 and passed the bar exams in 1997.

A daughter of longtime Judge Antonio Gerona of the Naga City Regional Trial Court, Leni worked quietly with civil society serving women and children in distress and farmers struggling to own their farms.

With the death of her husband, she became the figurehead of Jesse’s allies and supporters in Naga even as she vowed then that she would not want to enter politics for the sake of her children—Aika, 25, a government employee; Patricia, 18, a college student; and Jillian, 13, a high school student.

Leni was forced to heed the clamor of her husband’s supporters and allies on the brink of fragmentation when Jose Anselmo Cadiz filed his certificate of candidacy for congressman in the third district even as the local Liberal Party leadership announced that its candidate was going to be Naga Vice Mayor Gabriel Bordado.

It was only on Oct. 5, 2012, the last day of filing of certificates of candidacy, that she brokered the reunification of the Liberal Party leaders and finally filed her own certificate of candidacy.