Anna de Villa Singson, media and communication director of PPCRV, vows to make available the final result of their count as she explains the process of manual encoding. Video by INQUIRER.net’s Noy Morcoso lll 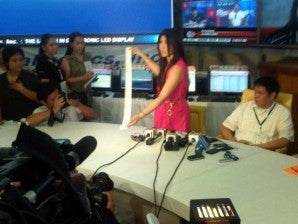 Along with its electronic count — which is being reported real time– the PPCRV was also mandated by the Commission of Elections (Comelec) to do an additional audit of the elections returns.

Ana De Villa-Singson, the media director of the PPCRV, described their copy of the election returns as the “cleanest, purest form of data.”

Singson said that each precinct count optical scan (PCOS) machine prints eight copies right after it closes and before it transmits the data to the Comelec Transparency Server.

After transmission, the PCOS machine prints another set of election results. But the pre-transmission elections returns are the data the PPCRV have.

From the provinces, they are shipped by their coordinators via Air21 to the PPCRV Command Center on United Nations Avenue in Paco, Manila, where their volunteers will encode it twice.

The seniors in the PPCRV then do “further verification” of the encoded election returns, before they are compared to the unofficial parallel count.

“If there was no manipulation, they (manual/electronic data) should be the same. They should be ideally, theoretically, statistically be the same,” said Singson.

Singson said that the PPCRV has received election returns from as far as North Luzon and expects those from the Visayas and Mindanao this afternoon.

Read Next
YOU CAN COUNT ON US
EDITORS' PICK
DOH says COVID-19 cases plateauing, but public shouldn’t be ‘complacent’
Look Through: The fate of impounded stray dogs
23,000 cops to be deployed nationwide for school reopening
What to watch out for when selecting a video surveillance solution
House energy committee chair Arroyo bats for cheap electricity
Unleash the photographer in you this World Photography Day with vivo smartphones
MOST READ
Sharon Cuneta asks for prayers for friend in ICU who suffered silent stroke
Korina Sanchez reunites with former ABS-CBN co-anchors Julius Babao, Cheryl Cosim
Secrets and lies
Solons file resolutions seeking probe on ABS-CBN, TV5 merger
Don't miss out on the latest news and information.