Comelec: Local bets may be proclaimed 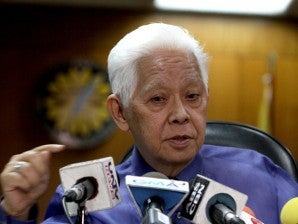 MANILA, Philippines – The Commission in Elections (Comelec), sitting as the National Board of Canvassers (NBOC), has allowed its local counterparts to proclaim the winning candidates based on partial results for as long as the remaining votes would not affect the final tally.

Comelec chairman Sixto Brillantes Jr. announced that they promulgated Resolution No. 9700 Tuesday also to defuse the tension among supporters of the candidates who have been waiting for the results outside of their local Comelec offices.

Brillantes said the board of canvassers in the municipal, city, and provincial levels could not yet proclaim the winners unless the results were complete.

This practice, Brillantes said, has delayed the proclamations as well as the transmission of results from the local level to the national level.

“As of last night (Monday night), we were having problems about all the lower level canvassing boards not proclaiming winning candidates despite the fact that there are already official results,” Brillantes told reporters during a press conference.

“The problem arose because … in 2010, [there should be] 100 percent [transmission of results at the local level] before proclamation can be made,” he said.

Brillantes also said that lower level boards must get clearance from the Comelec en banc before they can make any proclamation based on incomplete results, and this caused delays.

“This actually hindered the proclamation of so many winning candidates,” he said.

“Our resolution 9700, will now allow the lower level boards of canvassers to proclaim even in the absence of clearance from the national office, the national support center, or from the Comelec en banc provided that [a computation] shall have been made by the said board that the results will no longer be affected,” Brillantes said.

He added that winners in about 50 places have asked for immediate proclamation.

Another issue the poll officials were looking at was the tensions it caused because supporters of local candidates were waiting anxiously for the results outside of the local Comelec offices.

He however clarified that, in cases of close races for some positions, the local board of canvassers should not make any proclamation based on incomplete results.

“If there is an issue as to who is the winner and you cannot determine whether the remaining results will adversely affect [the results], do not proclaim provisionally or otherwise,” Brillantes said.

He said the boards will be required to submit their calculations to the Comelec. Their proclamation however would be subject to annulment by the Comelec National Board of Canvassers if ever there was an error with the calculation.