Aquino happy with turnout but spokesperson loses right to vote 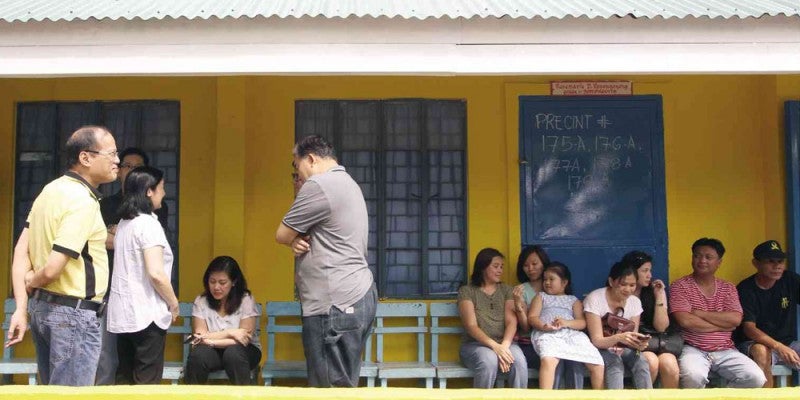 VOTERS IN WAITING President Aquino, accompanied by two of his sisters, waits for his turn—for 30 minutes—to vote at Precinct 175A at Central Azucarera de Tarlac Elementary School in Tarlac City on Monday. Aquino said he voted 12-0 for the administration’s Team PNoy Senate slate. With him are his sisters Ballsy and Pinky (2nd and 3rd from left) and brother-in-law Manuel Abellada. MALACAÑANG PHOTO BUREAU

HACIENDA LUISITA, Tarlac City—Despite glitches in the computer machine, President Aquino on Monday said he was happy at how the elections had turned out.

Perhaps he should have talked first with one of his spokespersons.

After exhorting Filipinos to exercise their right of suffrage, deputy presidential spokesperson Abigail Valte failed to cast her ballot despite having to line up in a Makati City public school. She was one of thousands of voters who had been disenfranchised.

“My name’s not on the list, not in the computer,” Valte tweeted while waiting to vote at Palanan Elementary School in Makati City.

The reason: Her name wasn’t on the list of registered voters because her registration status had been deactivated.

Valte’s boss found no such problem when he arrived to vote at Central Elementary School in Barangay (village) Central at 9 a.m., together with his sisters, Ballsy and Pinky, and his nephews.

Before the President came, a few minor glitches had disrupted voting in the school as election officials had to reset the precinct count optical scan (PCOS) machine four times, owing to a paper jam.

Still, Aquino said he was happy with the conduct of the elections, pointing out that there was a big difference between the 2010 elections, when he was elected President, and Monday’s polls.

“In 2010, many PCOS machines were not used but now the process is faster,” he told reporters.

Aquino and his companions waited for about 30 minutes for their turn to vote at Precinct 175A. 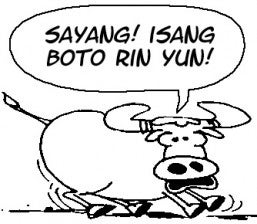 He was in a relaxed mood as he exchanged pleasantries with his village mates while waiting for his turn to vote. Occasionally, he would check his phone for messages.

In a press briefing, Aquino said this year’s elections were essentially peaceful. “We hardly heard reports of violence in places identified by the Comelec (Commission on Elections) as areas of concern,” he said.

He said he voted for the administration’s senatorial candidates, making sure he missed no one.

Aquino said the first in his alphabetical list of senatorial candidates whom he voted for was Aurora Rep. Sonny Angara, the last was former Las Piñas Rep. Cynthia Villar.

Since the names of candidates were interspersed with those of others, Aquino said he had to check his ballot well so he would not miss anyone.

Aquino was the 115th voter in a cluster of five precincts with 796 voters.

Valte was stumped by the disappearance of her name from the voters’ list.

Checking with the Comelec, she was told her registration status had been deactivated because, based on Comelec records, she skipped the 2007 barangay elections and the 2010 presidential vote.

“Strange because I voted in 2010. They showed me a hard copy of a list with photos and the space for my signature/thumbmark. For 2010, it was blank,” she said in her text message. “I have no idea why. I voted in 2010. It was my first time because I only registered in 2009.”

Which meant one less vote for Aquino’s 12 handpicked senatorial candidates. The President is pushing for a 12-0 administration sweep to muster a significant majority in the Senate in the second half of his term.

It was an ironic twist for Valte, who had repeatedly appealed to voters to go out and vote.

Valte said she was now looking ahead to the 2016 presidential election. “The Comelec official told me there was nothing I could do except wait for the next period of registration and reactivation,” she said.

Valte was consoled that her mother at least managed to vote. “Good news is, I found my mom’s name and precinct number,” she tweeted.

Valte drew sympathies from others who were as stumped as she on learning that her name had disappeared from the Comelec list.

“Good that he had no problems voting,” she tweeted on learning that Aquino had managed to vote with nary a hitch.

Despite reports of glitches, the administration said the polls were  apparently “generally orderly and generally peaceful.”

“Let’s leave that to the experts to decide whether it’s a cause for alarm but right now, based on what the Comelec said, it’s not significant enough to have an impact on the outcome of the elections,” Communications Secretary Ricky Carandang said of the glitches in the automated election process.

Carandang, nonetheless, called on the public to remain vigilant to make sure the peaceful trend stood.

“Like everyone else, let’s keep an eye on what’s happening, let’s remain on guard,” Carandang said. “It’s about 2:20 p.m., so far, so good.”—With a report from Norman Bordadora