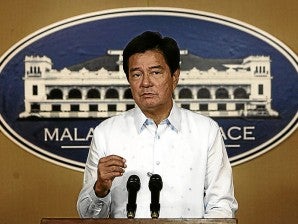 An advertising executive who was part of President Benigno Aquino III’s election campaign in 2010 is “almost sure” to succeed Tourism Secretary Alberto Lim, who announced his resignation on Friday at a news conference in Malacañang.

Lim’s resignation has been accepted by President Aquino and is to take effect on August 31. Weeks earlier, reports swirled that he was among the “headache” members of the Cabinet who informed Mr. Aquino of problems but offered no solutions.

Ad executive Ramon R. Jimenez has ties to both the “Samar” and “Balay” factions in the Aquino administration, a Palace source told the Philippine Daily Inquirer.

“It’s almost sure that it’s Jimenez [who will replace Lim],” the source said, but added that the name of former Akbayan Representative Risa Hontiveros had also been floated.

Hontiveros was among the senatorial candidates of the President’s Liberal Party in 2010. She placed 13th in the race for 12 Senate seats.

The source said Jimenez was “close to the Samar group but also friends” with Transportation Secretary Manuel “Mar” Roxas of Balay. “So both factions wouldn’t have any problem with him,” the source said.

Jimenez is the founder and president of Winning Over Obstacles (WOO) Communications Corp., a marketing and media consultancy agency.

He and his wife Abby are also the founders of ad agencies Jimenez & Partners, Jimenez D’Arcy and Publicis JimenezBasic. They have both retired but agreed to accommodate clients during the 2010 elections.

A source close to Jimenez confirmed that he was “on the list” but that the President had yet to speak with him.

Malacañang praised Lim for the 3.7 million international tourist arrivals from July 1, 2010, to June 30, and his advocacy for the liberalization of air travel.

“He has been a conscientious and highly dedicated member of the President’s official family,” Mr. Aquino’s spokesperson Edwin Lacierda said, adding that the number of foreign tourists had risen to “an unprecedented level” during Lim’s watch.

But in Cebu City, travel executive Robert Joseph said Lim’s resignation would benefit the tourism industry, and expressed hope that his successor would be not only fair but also equipped with people skills.

Joseph, who had long been calling for Lim’s resignation, said the latter had been one-sided in favor of foreign airlines in pushing the open-skies policy.

He also cited the “fiasco” of the Pilipinas Kay Ganda logo, which was reportedly a copy of Poland’s tourism logo.

A former executive director of the Makati Business Club (MBC), Lim said his reason for giving up the tourism portfolio was “personal.”

“I would like to spend more time with my family. My responsibilities require a great deal of travel and time away from my loved ones,” he said.

Responding to a question, Lim said he did not think he was one of Mr. Aquino’s “headaches.”

“I think you’ll have to ask the President [that], but I don’t think so,” he said, and described his relationship with Mr. Aquino as “very normal.”

Lim said he was open to taking on another government post.

“Of course, I would hope for a less stressful job because I come from the private sector, and maybe I’m not accustomed to the ways of government. I was learning,” he said, adding:

“I leave the President’s Cabinet gratified that I have laid the foundation for a strong tourism growth in keeping with [his] vision of inclusive growth. I thank [him] for the opportunity to serve the Filipino people as a member of his Cabinet.”

Lim said it was on August 5 when he had “a meeting of minds” with Mr. Aquino about his resignation although he started thinking of quitting “late last month.”

“[W]e agreed that it will be effective August 31 … just to give me time to hand over,” he said.

Lim said the tourism development plan that Mr. Aquino had asked for “is already on his desk and ready for presentation.”

“I will brief my successor, whoever he or she is, on the plan because it is a big plan. It is a detailed road map of actions to take over the next five years,” Lim said.

He said the plan’s objectives were to double international tourist arrivals by 2016 and to create 2.8 million new jobs.

“The programs will continue. The job of the DOT (Department of Tourism) is so important. It should not matter whether the secretary is there or not. The work is institutionalized. We have assigned undersecretaries and assistant secretaries to lead those programs,” he said.

Among these programs are “Pilipinas, Tara Na,” which was launched on Thursday, and the ongoing training of tourism policemen nationwide.

Lacierda, who lauded Lim’s “remarkable achievements,” said his resignation was announced on Friday “to permit [him] to attend the MICE (meetings, incentive, conventions, exhibitions) conference [in Cebu City].”

He would not confirm reports that Jimenez was being considered to replace Lim.

“When the President has made his choice, he will talk to the person and we will inform the public on the new tourism secretary,” Lacierda said.

Education Secretary Armin Luistro said the tourism secretary was at a Cabinet meeting on August 3 but gave no indication that he was planning to quit.

“His resignation must really be for a personal reason as none of us in the Cabinet that I know of had a clue that this was coming,” Luistro told the Inquirer when asked to comment on the matter yesterday morning.

“Having experienced personally the demands of government service and its effect on one’s health, career and family, I can understand and fully respect his decision. I am sure he will continue to contribute to the tourism industry, albeit as a private citizen,” Luistro said.

“With this development, we hope we may be able to see the needed direction of the Philippines,” said Bognot, now the president and event creator of Afro Asian World Events.

Hans Hauri, president of the Hotels, Resorts and Restaurant Association of Cebu, said the group was grateful to Lim for leading the tourism sector.

But Hauri added that he and his group were hoping that the new secretary would work with the Tourism Congress led by the private sector, as mandated by Republic Act No. 9593 (the Tourism Act of 2009).

Lim has been criticized for not recognizing the Tourism Congress.

“We regret that he has resigned. He has done a lot for the industry in the short period that he was at the DOT. He has done the groundwork. The National Tourism Development Plan is there, and it should be implemented. We’re seeking continuity, more than anything else. We’re very concerned,” Clemente said.

“Secretary Lim [took] most of the primary steps that had to be taken. He wanted to make sure that the product was of good quality. It wasn’t just about branding and marketing. His was the right approach. We really had to fix what we had to offer first before we can start marketing,” she said.

But in a separate interview, MBC executive director Peter Angelo Perfecto said Lim’s resignation should not be a cause for concern, or at least not yet.

Problems will arise if a successor is not immediately named, he said.

“Even if Lim’s successor doesn’t think the same way as he, having the same mind-set as the President should be enough. The successor can bring his own brand of management. We’re confident that there shouldn’t be any problems,” Perfecto said.

He added that Lim’s replacement should be prepared to face much pressure. With reports from Tarra Quismundo and Abigail L. Ho in Manila; Irene R. Sino Cruz, Inquirer Visayas; Inquirer Research