Many find it quite difficult to imagine tagging former partylist Representative Ana Theresia “Risa” Hontiveros as a “palaban” (fighting) lady. It’s a far cry, it seems, to her low-key personality, soft voice, and quiet charm. But deep down, Risa says she’s been an activist since her teens, ready to fight for what is right.

Hontiveros, donning one of the many alampay (shawls) she owns, tells INQUIRER.net during an interview for the INQuest: Vote 2013 that she left her first love—theater and music—during her teens after being inspired and influenced by her family to a life of activism.

“Becoming an ‘aktibista’ became my first love and I had many mentors who molded me into what I am today, a “palaban’ woman,” she says.

Asked if this didn’t affect her life then as a member of the upper middle class, Hontiveros says: “I’m a middle class girl but we hardly eat in restaurants; mas mura at mas nutritious kumain sa bahay. I don’t buy much clothes for myself, I buy more for my kids. I thank God because we own our house so we no longer rent; we have one vehicle. I budget from payday to payday. I pay my kids’ tuition on installment.”

She says she’s grateful with being able to cope with challenges that enables her to make ends meet, especially because she’s a single mom.

Bonding with her family (read “children”) seems hard as it is easy. “I sleep less; yun ang biro ng mga solo moms. Sleep later, wake up earlier to be able to do the important things for your kids. Once they’ve grown up, I can sleep longer but they’ll remember that when they we’re growing up I was there for them.”

She has one advice for her children, which may apply to other people as well. “Follow your bliss.” She tells her kids to have their own dreams and find out for themselves what they love most about life and to be good at and become an expert on what they love most to do.

Asked about her shawls, Hontiveros admits she started wearing one after being given a gold-colored alampay made from 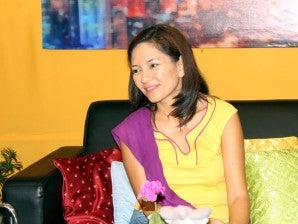 Former Akbayan Representative Risa Hontiveros shares her passions and dreams and talks about her `alampay’ and her `follow your bliss’ advice in INQuest Vote 2013 videocast. Noy Morcoso lll/INQUIRER.net

abel iloko during he

r early days with the partylist Akbayan. While serving as congresswoman, she says she always wore a blazer and an inner blouse to keep warm.

“But I still felt cold. And since I could no longer wear a jacket, I draped myself with a shawl which at that time was bigger—‘parang kumot’—,” she relates with a laugh

That style eventually evolved into a fashion of statement of sort, with her sporting an alampay with the color that represents what she’s currently is fighting for—bills, causes, etc.

She considers the Reproductive Health law as the most important legislation she has  helped enact. “I really feel it answers the basic questions that have something to do with being a woman.” If elected, she plans to push bills against corruption, that will create jobs for more people especially single moms, and that will provide at least one doctor for every village in the country.

“I hope that I would be able to make a difference (in the new Senate) just by being the kind of person na hinubog ng iba’t ibang komunidad for which I am still a part,” Hontiveros says.

For more of Risa Hontiveros, watch and listen to her on INQuest: Vote 2013.