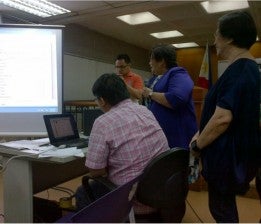 In the blink of an eye, 234 cities and municipalities were randomly chosen where a random manual audit will be conducted. The second selection process to choose the clustered precint will be done on the day before the elections. Matikas Santos/INQUIRER.net

MANILA, Philippines — In the blink of an eye, the Commission on Elections (Comelec) Friday randomly selected 234 cities and municipalities throughout the country where a random manual audit (RMA) would be conducted after the automated elections.

This was in stark contrast with the 2010 selection process where they had to use a tambiolo filled with encoded ping-pong balls to draw out which cities and municipalities will have an RMA.

That process took around eight hours according to Carmelita Ericta, National Statistics Office (NSO) Administrator and member of the RMA Committee of the Comelec. “It was already late in the evening when we finished,” she said during the presentation.

“It will take a longer time to print and distribute the results” Ericta said.

The selection of cities and municipalities is the first part of the two stage process. The second stage will be held on the day before the elections and will determine which clustered precint in the particular city or municipality will have the RMA

The purpose of the RMA is to determine whether there is a difference between the automated count and the manual count of the ballots.

Parish Pastoral Council for Responsible Voting (PPCRV) chairperson Henrietta De Villa, who headed the selection process said, “dont blink, it will be over fast” just before she chose the full list of cities.

After the first stage of the selection process, the laptop computer that did performed the elections was sealed and secured. It will be opened again on the day before the elections to carry out the second stage of selection.