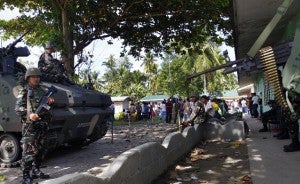 MANILA, Philippines — The Armed Forces of the Philippines raised the red alert on Friday as part of security preparations for the upcoming midterm elections on Monday.

Brigadier General Domingo Tutaan, AFP spokesman, told INQUIRER.net that government troops would have to be at their posts and vacations were canceled.

The AFP, as deputized by the Commission on Elections, will “secure the political process.”

The military went on its highest alert nationwide Friday and would stay until May 15, or “depending on the prevailing security situation,” Tutaan said.

In the same press briefing, Tutaan said raising the red alert status “was to ensure that all units in the AFP are prepared and are ready for the election this coming Monday.”

The military also condemned the New People’s Army over the ambush of the Comelec convoys in Kalinga and Camarines Sur on Tuesday that killed three soldiers.

“The AFP would like to condemn the acts of the New People’s Army armed group in the two recent incidents in Tabuk, Kalinga and in Camsur wherein three of our soldiers died in the line of duty. We would like to laud the heroism and the supreme sacrifice made by these soldiers,” he said.

Two soldiers were killed and six others were wounded when suspected communist rebels attacked a government convoy about to deliver Precinct Count Optical Scan (PCOS) machines in Tabuk on Tuesday morning.

In Camarines Sur, NPA rebels also ambushed a convoy delivering ballot scanners near Ragay at dawn, which killed one militiaman.

Families of the slain soldiers will receive benefits, pension and other assistance entitled to them.

Meanwhile, Tutaan vowed that the military would remain non-partisan.

“This [being non-partisan] is a clear violation of the omnibus election code so again it is both a fair warning and an assurance to the Filipino people that the AFP will continue to remain neutral in this elections, we’ll not be siding with any political parties on the matter and let the people exercise their right to vote and [choose] the leaders that want to lead,” he said.