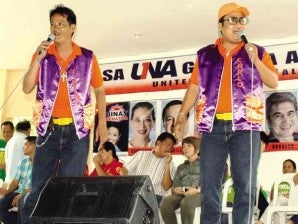 “I’m not anymore a favorite among political candidates. I sing for only a few now,” Laxamana, 69, tells the Inquirer.

In Pampanga, polosa is a musical tradition where a song is composed extemporaneously by a poet either in metered rhyme or free verse before an audience during rice planting, fiestas, birthdays, weddings and political campaigns.

Laxamana’s only big contract for the May 2013 elections is to perform in the caucuses of Maynard Lapid, the youngest son of Sen. Manuel “Lito” Lapid, who is running for councilor of Porac town. Porac has 29 villages, most of them in the mountains, foothills or communities beside rivers that overflowed with Mt. Pinatubo’s lahar (volcanic sediments). 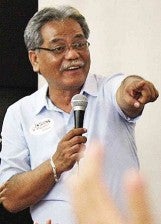 The contract requires Laxamana to attract, work up and keep the crowd and to introduce the young Lapid and his teammates through polosa. The work begins at 6 p.m. and lasts up to 11 p.m.

He wrote a Maynard Lapid campaign jingle, which is a Kapampangan adaptation of the soundtrack of “Leon Guerrero,” a movie that launched Lito Lapid’s career as the local Zorro.

Laxamana says the contract amounts to P150,000, a fee that he shares with his two guitarists.

Outside of the Lapid deal, he commands P8,000 or higher for each night of gig for other politicians in Pampanga.

In elections after the 1986 People Power Revolution, he recalls getting an average of 10 clients per season. He thinks his clients have declined because they now want modern sound systems, wide mobile screens, live musical bands and gyrating dancers.

However, Laxamana believes that he still has a big following in rural areas where life is much simpler. In Barangay (village) Manibaug on April 27, he got all the 200 residents attending the caucus.

Laxamana insists that politicians benefit from his art because he “connects more” with the people. “I sing their joys, pains and aspirations,” he adds.

Many of his songs are a funny take on life and relationships; others are full of lamentations. But he likes best his “Lugud ning Indu (Love of Parents)” for the reminder it gives to children.

Drawn to the tradition of polosa by listening to Maria Sarat of Bacolor and honing his singing by following the programs of Kuya Cesar, Eddie Ilarde, Bobby Gonzales and Rafael Yabut on radio, Laxamana launched his career in 1972 through the song “40 Days.” It is about the widespread floods that submerged many parts of Luzon that year. 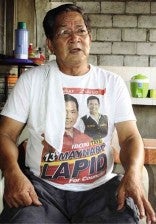 As many politicians ignore his talent, Laxamana received the Taboan Award, organized by the National Commission for Culture and the Arts, in 2012 for helping preserve the tradition of polosa.

“In polosa, one has to compose fast. One has to know old terms,” Laxamana says, pointing out the art’s role in preserving the language.

In days when portable cassette recorders dominated homes, he was a hit among Kapampangans who worked overseas. His songs on cassette tapes, he remembers, cured their homesickness.

Laxamana has recorded between 30 and 40 albums, all self-produced. He regretted not having signed up a contract with Wea Recording in 1986. “I missed the opportunity of being like Yoyoy Villame and perhaps, earn royalty from my songs,” he says. 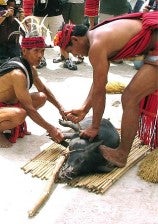 DURING the election season in the Cordillera, candidates butcher native pigs to divine their political fate. EV ESPIRITU

But as his presence in campaign circles is waning, Totoy Bato copycats have emerged, mainly performing in fiestas and other occasions.

There’s “Totoy Balas,” whose true name is Celito Paz of Angeles City. Paz says he imitated Laxamana because he is his “idol.” Paz sings in the campaign sorties of Mayor Edgardo Pamintuan.

Then, there is a “Totoy Jr. of Guagua,” who claims to being a son of Laxamana. He says a “Totoy the Third” has been making the rounds of fiestas.

“He’s telling people that I am dead,” Laxamana rues.

In Pangasinan, novelty singer and composer Raul “Insyong” Tamayo had a good laugh at himself one day during the 2010 elections when two campaign vehicles of the mayoral candidates of Sta. Barbara town passed by the national road one after the other while he was waiting for a ride.

He laughed because the campaign jingles blaring out of the vehicles’ sound systems at that time were both composed and sang by him.

“I don’t do that anymore for candidates now,” says Tamayo, 52, who is easily the most sought-after campaign jingle-maker in Pangasinan every election.

This is so not only because of his popularity as a singer, radio announcer and stage comedian but because the campaign jingles he has been producing were all well-thought of and therefore, effective.

To Tamayo, producing campaign jingles is not simply using or adopting any tune for a candidate and putting in “vote for” words there. To him, it is important that he first sits down with his client for a “getting-to-know-you” session.

“I should first know my client’s battle cry, advocacies and personality. So that when I produce the campaign jingle, I could choose the right tune for him or her,” Tamayo says.

He says he knows a campaign jingle he produced is successful when he hears it being sung by children. And if his candidate wins, it’s a bonus for him, he says.

“Children, although they are not voters, help spread the jingle by singing it in their homes and they are heard by their parents and other people who can already vote,” he says.

Although seasonal, jingle-making is a lucrative business, he says, adding that he charges P35,000 for every jingle.

But the money he earns does not go to him alone. He has to pay an arranger, a recording technician and back-up singers involved in the production.

“Many people actually benefit from a single campaign jingle,” he says.

When Tamayo started producing campaign jingles during the 1988 local elections, there were just two of them in the province who were into it.

“But today, there are many of us already. In my clan alone, there are three of us—Gusting Tamayo, my cousin, and another cousin, Perlita Radam,” he says.

Unlike in past elections, Tamayo has selected his clients for the May 13 polls.

“It’s necessary that I believe in what my clients stand for. That’s actually my inspiration in writing the lyrics of a campaign jingle,” says Tamayo, who can compose a jingle in three hours.

“Jingle-making is here to stay. As long as there are elections, we have this business,” Tamayo says.

By Frank Cimatu in Benguet and Anselmo Roque in Nueva Ecija

ROSE LONSO, whose house and piggery in Tublay, Benguet, were destroyed by Typhoon “Pepeng” in 2009, was delighted when a nongovernment organization gave her starter pigs three years ago. But she could not hide her disappointment when the piglets arrived and they were white.

Lonso is among the hog raisers of black ritual pigs, known by the Ibaloi as buttog and by the Kankanaey as besaang. These diminutive small-eared native pigs are highly sought for cañao (native feasts) and election campaigns.

Boy Antonio, a political campaigner for the Dangwa family of Benguet, says the buttog is getting rare and much more expensive than the white commercial hogs.

In the past, many mayoral candidates in the interior towns of Benguet used to campaign together not only to refute and debate each other’s platforms but, more importantly, so they could contribute to the slaughter of these buttog.

Antonio says the buttog is specified by the native ritual leaders or mambunong so they can divine the bile sac or liver (mamidis) if the politician will be successful or not.

Selmo, however, says most candidates now campaign on their own, but because of the prohibitive cost of the buttog, they would rather slaughter white pigs.

“We usually don’t slaughter pigs in every sortie, but there are places where the elders would require that we do,” Selmo says.

Lonso says Tublay then was known for raising buttog but because of Pepeng, many hog raisers had been asked to relocate. Those who stayed had no place to raise pigs, she says.

To help bring back the buttog, the National Swine and Poultry Research and Development Center has developed the Tiaong (Quezon) black pigs by selecting the best genetic resources from Benguet to as far as Marinduque and Quezon provinces.

Farmers and cooperatives in Quezon, Laguna and Batangas are raising the Tiaong black pigs and will soon introduce them to Benguet and other parts of the Cordillera where they are also regarded as ritual animals.

In Nueva Ecija, the political season has provided a steady income for tricycle drivers.

Due to their size and maneuverability, tricycles have come as a handy vehicle, compared to jeepneys or vans, for candidates’ sorties. These can easily go to remote areas and trudge rough terrain and narrow streets.

This preference for tricycles has earned a bonanza for driver Edgar Tolentino, 37, of the Science City of Muñoz. He and his tricycle are hired by a candidate from 6 a.m. to 6 p.m. in going around villages with the blaring sound system that plays the bet’s campaign.

If the election season gave Tolentino a good income, it is a let-down for Ezra Limbo, 40, owner of the Ezrei’s Art establishment, also in Muñoz.

He says technology and the use of tarpaulin printing have caused the downfall of sign painting even if the former is more expensive.

For streamers using sign painting, a 1 x 12 yard costs P120 while a tarpaulin streamer of the same size fetches P1,200.