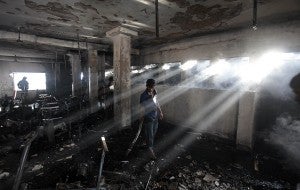 DHAKA, Bangladesh— Hundreds of survivors of last month’s collapse of a building housing garment factories in Bangladesh protested for compensation Tuesday, as the death toll from the country’s worst-ever industrial disaster passed 700.

The police control room overseeing the recovery operation said the death toll stood at 705 on Tuesday afternoon as workers pulled more bodies out of the wreckage of the eight-story building that was packed with workers at five garment factories when it collapsed on April 24. The factories were making clothing bound for major retailers around the world.

The disaster is the worst ever in the garment sector, surpassing the 1911 garment disaster in New York’s Triangle Shirtwaist factory, which killed 146 workers, and more recent tragedies such as a 2012 fire that killed about 260 people in Pakistan and one in Bangladesh that killed 112, also in 2012. It is also one of the deadliest industrial accidents ever.

No one knows what the final toll will be, as the exact number of people inside Rana Plaza at the time of the collapse was unknown. More than 2,500 people were rescued alive.

Hundreds of garment workers who survived the disaster blocked a major highway near the accident site in a Dhaka suburb on Tuesday to demand the payment of wages and other benefits. No violence was reported, although traffic was disrupted for hours.

Local government administrator Yousuf Harun said they are working with the Bangladesh Garment Manufacturers and Exporters Association to ensure the workers get paid.

The workers, many who made little more than the national minimum wage of about $38 per month, are demanding at least four months in salary. The workers had set Tuesday as the deadline for the payment of wages and other benefits.

Harun said no salary remained unpaid except for the month of April and there was an agreement for the workers to receive an additional three months of pay. After a team from the BGMEA arrived at the protest and pledged to make the payment later Tuesday, the workers left the highway, Harun said.

The BGMEA had said Monday that it was preparing a “complete list” of the workers employed in the factories and they would need a few more days to finish it and to clear the salary.

Bangladesh earns nearly $20 billion a year from exports of the garment products, mainly to the United States and Europe.

Authorities have not set any specific timeframe to complete the recovery operation at the building site, saying they will continue until all bodies and debris are removed.