2 poll campaigners gunned down in Quezon 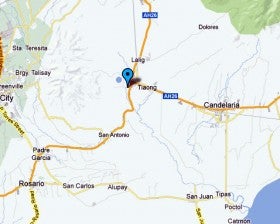 “What is happening now in Quezon? This is the first time in the province’s election history that political campaigners are being killed in cold blood,” Marquez told the Inquirer in a telephone interview.

The bishop noted how one person was killed and another wounded in an ambush in General Nakar town in the northern part of the province.

“These senseless killings were alarming. It is causing fear among our people,” Marquez said.

Suarez said his family was offering P400,000 to anyone who could provide the police with information leading to the arrest of the killers of Genesis Castillo, 32, and his live-in partner, Sharon Matibag, 30.

The victims both worked for Suarez’s re-election campaign as community organizers.

“I strongly condemn the killings. Based on information, the couple were ordered by their killers to kneel before they were gunned down. This is really outrageous and revolting,” Suarez told the Inquirer.

Senior Supt. Dionardo Carlos, Quezon police chief, said that on Monday at around 10:30 p.m. Castillo and Matibag, who were both employed as “rural development consultants” at the povincial governor’s office, were shot dead by still unidentified persons in Barangay Lagalag in Tiaong town.

Carlos said villagers who live near the crime scene heard several gunshots. After several minutes, the villagers found the bodies of the victims lying face down on the grassy road of Sitio De la Fuente.

Police investigators recovered eight spent shells from a carbine rifle and two slugs from an unknown caliber at the scene.

Suarez declined to say the killings were politically motivated.

“I’m leaving that to the police to find out. But since we’re now on the homestretch of the campaign, maybe there are politicians who are now desperate because of their impending defeat and are now resorting to violence to frighten the supporters of their political foes,” Suarez said.

Suarez said the victims were residents of Lucena City but were in Tiaong to bring medicines to barrio folks who asked for help from the governor’s office.

According to a friend of the victims, the couple, who had two children, planned to get married after the elections.

On Sunday afternoon, Pio Astejada, General Nakar town treasurer, and his wife, Amelia, were driving home in a van when they were shot by men on a motorcycle in Barangay Banugao in Infanta town. Amelia was declared dead on arrival at a local hospital while Pio was transferred to an undisclosed hospital in critical condition, police said.

Police investigators have yet to disclose possible motives for the shooting.

General Nakar Mayor Leovigildo Rozul declined to give any possible reasons for the ambush.

“But Pio is one of the members of the election board of canvassers. He is in possession of sensitive documents,” Rozul said in a phone interview.

Marquez called on law enforcement authorities in Quezon to immediately solve the killings and bring the culprits to justice.

The bishop appealed to candidates not to resort to violence during the remaining days of the campaign. He also asked candidates “not to blind” the voters with self-serving survey results and not to entice them with cash and material things in exchange for their votes.

“The vote of the people is sacred. Respect them as you respect your mother and father,” Marquez said.