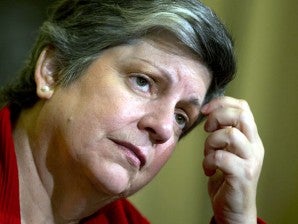 In this April 18, 2013 file photo, Homeland Security Secretary Janet Napolitano testifies on Capitol Hill in Washington. The Homeland Security Department ordered border agents “effective immediately” to verify that every international student who arrives in the U.S. has a valid student visa, according to an internal memorandum obtained Friday by The Associated Press. The new procedure is the government’s first security change directly related to the Boston bombings. AP

WASHINGTON— The U.S. Homeland Security Department ordered border agents to verify that every international student who arrives in the country has a valid student visa, according to an internal memorandum obtained Friday by The Associated Press. The new procedure is the government’s first security change directly related to the Boston Marathon bombings last month.

The order, effective immediately, was issued by a senior official at U.S. Customs and Border Protection, David J. Murphy. It was circulated Thursday, a day after the Obama administration acknowledged that a student from Kazakhstan accused of hiding evidence for one of the Boston bombing suspects was allowed to return to the U.S. in January without a valid student visa.

The student visa for Azamat Tazhayakov had been terminated when he arrived in New York on Jan. 20. But the border agent in the airport did not have access to the information in the Homeland Security Department’s Student and Exchange Visitor Information System, called SEVIS.

Tazhayakov was a friend and classmate of Dzhokhar Tsarnaev’s at the University of Massachusetts Dartmouth. Tazhayakov left the U.S. in December and returned Jan. 20. But in early January, his student-visa status was terminated because he was academically dismissed from the university.

Tazhayakov and a second Kazakh student were arrested this week on federal charges of obstruction of justice. They were accused of helping to get rid of a backpack containing fireworks linked to Tsarnaev. A third student was also arrested and accused of lying to authorities.

A spokesman for the department, Peter Boogaard, said earlier this week that the government was working to fix the problem, which allowed Tazhayakov to be admitted into the country when he returned to the U.S.

Under existing procedures, border agents could verify a student’s status in SEVIS only when the person was referred to a second officer for additional inspection or questioning. Tazhayakov was not sent to a second officer when he arrived, because, Boogaard said, there was no information to indicate Tazhayakov was a national security threat. Under the new procedures, all border agents were expected to be able to access SEVIS by next week.

The government for years has recognized as a problem the inability of border agents at primary inspection stations to directly review student-visa information. The Homeland Security Department was working before the bombings to resolve the problem, but the new memo outlined interim procedures until the situation was corrected.

It is unclear what impact the new procedure will have on wait times at airports and borders. Customs officials will be required to report any effect, including longer waits, on a daily basis.

The Obama administration announced an internal review earlier this week of how U.S. intelligence agencies shared sensitive information before the bombings and whether the government could have prevented the attack. Republicans in Congress have promised oversight hearings, which begin Thursday.

Lawmakers and others have long been concerned about terrorists exploiting the student visa system to travel to the United States. A 20-year-old college student from Saudi Arabia was arrested in Texas in 2011 on federal charges of attempted use of a weapon of mass destruction. Authorities accused him of plotting to blow up dams, nuclear plants or the Dallas home of former President George W. Bush. He was later convicted and sentenced to life in prison.