What Went Before: Dacer-Corbito murders 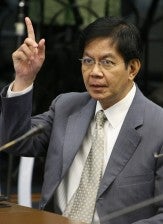 MANILA, Philippines—In his affidavit, Senior Supt. Glenn Dumlao said then President Joseph Estrada and Panfilo Lacson, then chief of the Philippine National Police and PAOCTF, might have knowledge of the Dacer-Corbito murders.

Both Estrada and Lacson denied knowing anything about the killings.

In May 2006, the Manila Regional Trial Court ordered the arrest of Mancao and Aquino after finding probable cause to prosecute them and 18 others for the murders of publicist Bubby Dacer and his driver Emmanuel Corbito.

Two years later, Mancao and Dumlao were arrested in the United States after the Philippine government requested their extradition.

In February 2009, Mancao executed an affidavit in the United States, tagging Lacson as the mastermind of the killings. He said that about a month before the murders, he heard Lacson tell Aquino, Lacson’s then most loyal aide, to have Dacer killed.

Mancao’s affidavit prompted Dacer’s children to ask the Department of Justice (DOJ) to reopen the investigation and include Lacson among the accused.

Mancao arrived in Manila in June 2009 and pleaded not guilty to the charges against him in the Manila court. He later agreed to turn state witness in the case.

Dumlao arrived a month later and was dropped from the list of the accused.

The DOJ brought two counts of murder against Lacson in January 2010. The Manila court issued a warrant for the senator’s arrest.

But before the prosecutors could bring charges against him, Lacson fled the country. He claimed that he was being persecuted by the government because of his damaging exposés against then President Gloria Macapagal-Arroyo and her husband.

In August 2010, during an appearance in court, Dumlao said he refused to go along with the script handed to him by the DOJ prosecution team and “stood his ground,” defending Lacson’s innocence.

In February 2011, the Court of Appeals’ special sixth division threw out the double-murder case against Lacson, saying there was no probable cause “to justify the filing of two separate informations for murder against [Lacson], consistent with his constitutional right to be presumed innocent and in consonance with existing jurisprudence, he should be relieved from the pain and agony of trial.”

Later, the Court of Appeals ruled that Mancao was an unreliable witness, citing inconsistencies and contradictions in his affidavits.

In January 2012, Mancao was removed from the Witness Protection Program and was turned over to the NBI after the Supreme Court affirmed the Court of Appeals’ ruling, declaring him unfit to serve as state witness.

“Under oath, he contradicted himself on material points. Inconsistencies and material contradiction affect the credibility of Cezar Mancao and the veracity of his statements,” the court said.

With the dismissal of the petition to discharge him as a coaccused, Mancao was again considered an accused in the case.

Aquino was extradited in June 2011 after serving a three-year jail term in the United States for espionage.

He pleaded not guilty to the charges against him in the Dacer-Corbito case. The court ordered his release in December 2012 for lack of evidence to prosecute him. Inquirer Research