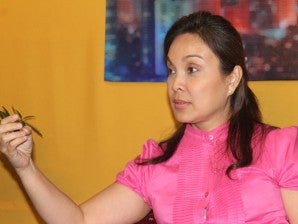 MANILA, Philippines — Senator Loren Legarda allegedly failed to declare as part of her assets a posh condominium unit on Park Avenue in New York for four years, and did so only in 2011 just before she and the other senators convened as an impeachment court to try then Supreme Court Chief Justice Renato Corona.

Businessman Louis Biraogo, a self-styled public interest advocate, made the revelation on Thursday at a hastily called press conference, in which he accused Legarda of being “as guilty” as the impeached Corona for not declaring all her assets in her statement of assets, liabilities and net worth (SALN).

Biraogo also accused Legarda of trying to hide her ownership of a multimillion peso mansion at No. 40 Cambridge Circle in the exclusive Forbes Park in Makati City, registered under Loren Legarda and Associates (LLA), and of opting to declare her old family home in Malabon City as her official residence.

“I have the smoking gun needed to prove that Legarda does not deserve to stay a minute longer as a senator of the land,” Biraogo said, presenting before the media copies of the documents he said he obtained “just by searching Google,” and with the help of lawyer friends.

Biraogo said the documents proved that the re-electionist senator, who is leading in most surveys in the midterm elections, paid the “princely price” of $700,000 (about P36 million based on the 2006 exchange rate) for the condo unit at 77 Park Avenue.

He described the location as a “very expensive area in New York where the Rockefellers and Trumps also have properties.”

Documents provided by Biraogo showed that Legarda bought the 708-square-foot single-residential condominium unit 10-B from a certain Frank Feinberg of Wall Street, Seattle, Washington, on May 9, 2006, for $700,000.

In all four filings, an item in Annex A for real, personal and other property showed her “equity in real property (co-owned with brothers, etc.)” of P7.175 million.

In 2011, however, an item under “Real Property-USA,” appeared in her SALN with the acquisition cost of P28.7 million.

Biraogo said if this was the same Park Avenue property, then Legarda might have undervalued the condominium unit by using the 2011 exchange rate, instead of the 2006 rate.

“Using the peso-exchange rate in 2011 instead of the prevailing rate in 2006 may be another clue that Legarda was already frazzled, dazed and confused even, when she declared that acquisition cost of P27,800,000 (sic),” he said in a press statement.

“What made Legarda declare a US property in her 2011 SALN? Was it because she became very, very afraid that she would be in the same boat as Corona — that her hidden condo unit at 77 Park Avenue would be found?” Biraogo said.

“Let’s not forget that she filed her 2011 SALN at about the time when the impeachment trial of Corona was already at fever pitch,” he said.

Responding to Legarda’s defense that she listed the US property under Annex A of her SALN in 2007, Biraogo said this was not true.

“Annex A is the very instrument of Senator Legarda’s deceit and her circumvention of the strict SALN requirement that all properties must be declared as to their location, acquisition cost and fair market value,” he said.

“Where in Legarda’s SALNs from 2007 to 2011, or in any of their annexes can the word #77 Park Avenue, NYC, be found? The answer is ‘nowhere’ because Legarda has never declared the same in the strict manner prescribed by the law.”

At the press conference, Biraogo said he was not singling out Legarda. “It so happened that we only have evidence against her. If we get evidence against other candidates, we will run after them, too.”

He acknowledged that he was connected to a failed movement to convince former Vice President Noli de Castro to run for president in the 2010 elections, but said the public should not jump to conclusion.

“How can there be any connections when Noli has terminated his political career already? And if Noli de Castro is doing this out of vendetta, he should have done it a long time ago,” Biraogo said.

Biraogo, 52, lists as his sources of livelihood his trucking business, T. Biraogo Trucking Corp. based in Biñan, Laguna, and buy-and-sell. He heads a newly formed “public interest advocacy group” called Citizen Barok that “keeps a watchful eye on government.”

He said he would file graft and corruption, money laundering and perjury charges against Legarda in the Ombudsman to make her accountable for her non-disclosure of the US condo unit and a mansion at Forbes Park in Makati.

“Legarda’s propensity to have properties in the neighborhoods of the ultra-rich is also reflected in her being a resident of a mansion at No. 40 Cambridge Circle in Forbes Park, Makati,” he said.

He cited a lifestyle article written by Joanne Rae Ramirez, in which Legarda purportedly confirmed her ownership of the Forbes Park mansion and described it as her “dream home.”

“But on paper, the Forbes mansion is owned by Legarda’s PR firm Loren Legarda and Associates Inc. (LLA Inc.), a company which has no real assets, income or known activities related to PR.

“But is it really owned by LLA, Inc.?” asked Biraogo. “Loren Legarda owns 99 percent of LLA, so she is for all intent and purposes the owner of the mansion at No.40 Cambridge Circle, Forbes Park. Has she declared ownership of the Forbes Mansion? Nope,” Biraogo said.

He said LLA Inc. may prove to be Legarda’s own version of the Basa Guidote Enterprise used by impeached Chief Justice Corona to defend questionable acquisition of properties.

“Will Loren also call on her father and two brothers to testify to save her?” the businessman asked.

Records showed that as early as 2006, LLA was the registered owner of the mansion in Forbes Park, Biraogo said.

But even though LLA indicated its ownership of the property in its 2006 tax declaration, Legarda acquired it as early as 2002, he said.

Biraogo said he had been a public interest advocate since 1984 when, as a sophomore student at the University of the Philippines in Diliman, where he finished philosophy, he sued then UP President Edgardo Angara all the way to the Supreme Court for hiking tuition and other fees.

He said he filed another suit in the Supreme Court in December 1985 questioning the validity of the snap presidential elections.

He said he was also a lead petitioner in the court fight against the anti-cybercrime law, which Congress passed in 2012.