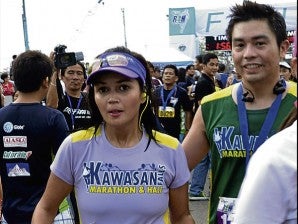 MANILA, Philippines — The Bureau of Internal Revenue filed on Thursday a criminal complaint against a Cebu City-based ophthalmologist for evading taxes and failing to supply the BIR with correct and accurate information in his tax returns for 2009 to 2011.

The criminal complaint was filed at the Department of Justice against Dr. Potenciano Sto. Domingo Larrazabal III, husband of singer-actress Dona Cruz.

Citing third party information, the BIR said Larrazabal received a total of P29.14 million in professional fees from 2009 to 2011 from PhilHealth alone but declared only P4.72 million for the three-year period.

The BIR said Larrazabal should have registered as a value added tax payer and filed the required quarterly VAT returns as his earnings was well above the threshold required to register as a VAT taxpayer.

Larrazabal allegedly under-declared his income, did not pay the correct income tax, failed to pay the VAT and file his VAT returns.

The BIR computed Larrazabal’s deficiency taxes for the three-year period at P21.14 million.

Charged were Vicente Velario, Joseph Macuha and Noradel Mendoza for violating Section 253 of the National Internal Revenue Code by willfully aiding Philmay Property Inc. in evading taxes and not putting the correct information in its tax returns with the BIR.

Philmay is a real estate company that used to hold office at Legaspi Towers along Roxas Boulevard and has relocated to Bonifacio Global City in Taguig City.

The BIR alleged that Velario, Macuha and Mendoza were the revenue officers first authorized to examine Philmay’s book of accounts and accounting records from July 1, 2008 to June 30, 2009.

The BIR said Philmay declared a P50.64-million loss in its annual income tax return for the fiscal year ending June 30, 2009. Velario, Macuha and Mendoza were sent to investigate its books. The three made it appear that Philmay’s deficiency taxes amounted to only P499,206.53.

An agreement form was completed on July 9, 2010, with the revenue officers saying that an audit examination was conducted and that the deficiency tax amounted to only P499,205.53. Philmay paid the taxes through the BIR’s electronic filing payment system on July 37 and 30, 2010.

Upon investigation, the office of the BIR commissioner learned that the initial assessment of the three revenue officers actually amounted to P51.96 million and the case was further scrutinized.

Philmay also claimed a deductible expense amounting to P3.21 million for the fiscal year ending 30 June 2009 representing salaries and wages. The BIR said the company should not have claimed the expense as a deduction as it failed to withhold any tax on the salaries and wages, which should have been done monthly.

The company also claimed P50.21 million in operating expenses in its income tax return for that year that included salaries, allowances, fringe benefits and interest expenses that were not supported by any document.

The BIR said Philmay also did not report P95.07 million of its real estate sales for the year in its value added tax return nor did it pay the necessary documentary stamp taxes for the transactions or the expanded withholding tax.