Several hurt in May Day clashes in Istanbul 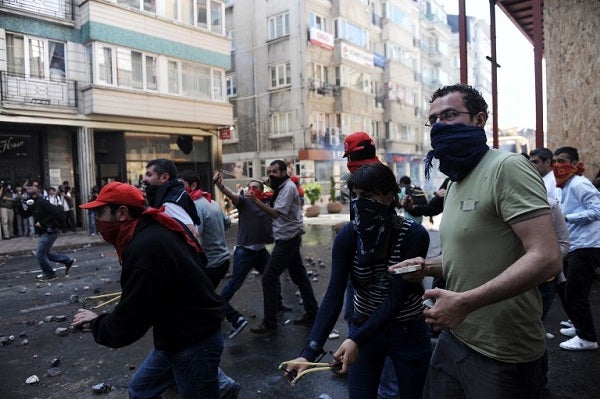 Masked protestors throw objects during clashes at a May Day demonstration on May 1, 2013 in Istanbul. Turkish riot police used water cannon and tear gas on Wednesday in a bid to disperse hundreds of protesters who defied a Labour Day ban on demonstrations in a central part of Istanbul. The ban was imposed to avoid trouble during renovation work taking place at the symbolic Taksim square, a traditional rallying point. AFP/BULENT KILIC

ISTANBUL — Several people were injured on Wednesday as Turkish riot police used water canon and tear gas to disperse hundreds of protesters who defied a May Day ban on demonstrations in a central part of Istanbul.

About a dozen people were hospitalized after exposure to tear gas which clogged the air around the symbolic Taksim square, according to AFP journalists.

Two policemen were among those injured as well as an AFP photographer who was assaulted by protesters wearing balaclavas who broke one of his cameras.

The Istanbul governor’s office said 20 protesters had been arrested.

The Turkish government decided to ban May Day gatherings on Taksim Square — a traditional rallying point — saying that because of renovations begun in November, security could not be assured for the tens of thousands of demonstrators expected.

But the leftist Disk union vowed to ignore the ban. Turkey has mobilised 22,000 police to provide security throughout the day.

Protesters threw stones at the police who tried to prevent the protest in the Besiktas neighborhood of Istanbul, which is about two kilometers (a mile) from Taksim square.

“Death to fascism. Long live May 1,” shouted the protesters who were rallying to calls from leftist parties and unions.

Clashes erupted in three neighborhoods leading to Taksim Square where the authorities had blocked off the streets to prevent protesters from reaching it.

The Istanbul office of Prime Minister Recep Tayyip Erdogan, located in Besiktas, were barricaded and defended by dozens of policemen backed by anti-riot armored vehicles.

A group of 30 feminists, waving violet flags and shouting “all together against fascism”, was pushed back by police firing tear gas.

By midday tension had abated and the protesters slowly dispersed. Television stations said May Day was celebrated without incident in two other parts of the massive Turkish city.

Government however authorized the laying of wreaths in memory of 34 people killed during a 1977 May Day protest, when unknown demonstrators fired shots into the air, sparking panic.