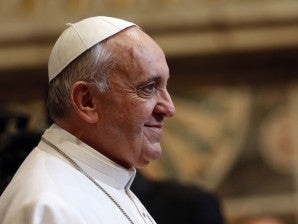 VATICAN CITY — Pope Francis on Wednesday urged political leaders to make every effort to create jobs and said unemployment was caused by economic thinking “outside the bounds of social justice.”

“I call on politicians to make every effort to relaunch the labor market,” the Argentine pope told thousands of followers at his weekly general audience in St. Peter’s Square, which coincides with May Day demonstrations around the world.

“Work is fundamental for dignity,” he said.

“I think of labor market difficulties in various countries. I think of people, not just young people, who are unemployed often because of an economic conception of society based on selfish profit outside the bounds of social justice,” he said.

As the former archbishop of Buenos Aires, Jorge Bergoglio, Francis became a leading voice on the side of the dispossessed during his country’s devastating economic crisis.