Albay governor: I was only extra-hospitable 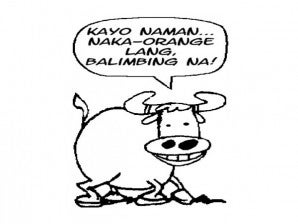 Albay Gov. Joey Salceda was just “extra-hospitable” to the United Nationalist Alliance (UNA) when he posed for cameras with its senatorial candidates Nancy Binay and Jack Enrile in Albay on Sunday.

In a text message he sent to President Aquino on Tuesday, Salceda explained to the Liberal Party (LP) chairman the circumstances surrounding his not-so-secret “endorsement” of the senatorial candidacy of the daughter of Vice President Jejomar Binay and the son of Senate President Juan Ponce Enrile, two of the so-called “three kings” of UNA.

Were it not for his position as regional chairman of the ruling LP in Bicol, Salceda would have gotten away with this rather bizarre public display of political loyalty, or the lack of it.

However, in an ambush interview on Tuesday, the President said he remained confident that Team PNoy had the “full backing” of Salceda in the vote-rich region.

“Let me read it first (since) Joey Salceda responded. The gist of this lone message is—he was just extra-hospitable. So he says nobody talked to him and he is being quoted,” said the President.

Aquino then decided to read the text message aloud.

According to Salceda, he entertained UNA candidates since “they are guests” of the local festival, “Daragang Magayon.”

“Their encounter lasted for 15 minutes. When he campaigned for Team PNoy—when Team PNoy was there (last March)—it was 18 hours,” said the President, paraphrasing Salceda’s text message.

“When I was asked (about the support of) Albay, it’s still 10-2 (for Team PNoy),” said the President, quoting Salceda.

They questioned Salceda’s pitching for Binay, with Magsaysay saying “this is not right.”

“To think that [Salceda] is the head of [the Liberal Party chapter in Bicol]. It might have been a personal choice, but he is expected to have additional responsibilities given his position in [the party],” Magsaysay said.

In the text message, Salceda admitted that he “was asked to raise (their) hands.”

“I courteously held the hands of Nancy and Jack but did not raise (them). Then, that made me stand up and go,” he said.

Several reports—by local papers and online news outlets—confirmed that Salceda appeared with Binay and Enrile at the press briefing, which was also attended by the Vice President himself.

A picture circulating on the Net showed him clad in UNA’s orange color as he held the hands of Nancy and Enrile.

Salceda was quoted as saying: “I’m not about to endorse Nancy directly. I always wear my heart on my sleeves. Certainly, she has my vote.”

In Legazpi City, Salceda expressed dismay over media reports saying he was not toeing the LP line for a 12-0 sweep by Team PNoy in Albay.

He said there was no statement from him on the matter. “Definitely, I did not say it,” he said.

Salceda, in a text message on Tuesday, said the dropping of the 12-0 Team PNoy goal and pushing for the 6-5-1 slate instead were farfetched political scenarios.

“Because as a Chinese proverb says, ‘In a rising tide even the garbage goes up.’ The converse of 10-2 is not 12-0. But surely nowhere did I proffer the idea of so called 6-5-1 sample ballots,”he said.

Salceda, reacting to an Inquirer report said, “This is journalism of the worst order,”where he was quoted that he would vote for Nancy Binay. “I gave no such statement,” he said.

The governor said the role he played on Sunday was to welcome Vice President Binay, being the second titular head of the country.

“The (Binay) visit in Albay was an occasion where the Daragang Magayon Festival, a monthlong celebration, was on its climax,”he said.

Salceda said everybody was welcome in Albay, regardless of party, organization or religious affiliations.

“It’s an Albayano’s trait to be hospitable and friendly,”he said.

Salceda said he was asked to introduce Binay because a program of the Housing Urban Development Coordinating Council, which is headed by the Vice President, had beneficiaries including the town executives of Sto. Domingo and Tiwi towns in Albay.

“After the program, the Vice President asked me to join him for lunch at the Oriental Hotel Legazpi. There we had a closed-door lunch with the UNA contingent and the party’s ‘embedded’ media team. There were no media statements there,” he said.

Salceda said “when I was called to sit at the VP’s table, the media swarmed” around it.

He added he told reporters he fought with Binay under Bandila against the Marcos dictatorship.

Salceda said he remembered Binay as a “Rambotito” defending the Cory Aquino administration against the coups and that he had acknowledged Binay’s leadership of Makati City.

He said Binay pushed the “frontiers of LGU (local government units) engagement and role in nation-building and national development.”

“I was half-seriously asked by the media to raise the hands. I merely held the hands of Nancy and Jack, but did not raise them. It was a signal for me to stand and go,” the governor said.

“Senator Jinggoy just laughed and said that I was a character.”

Salceda denied reports he accompanied UNA to its rally, saying he was too busy attending to the Daragang Magayon Festival’s grand street-dancing presentation.

No rally in Legazpi

Except for an UNA rally in Tabaco City, there was no rally in Legazpi City and in Polangui but the team had a motorcade in Legazpi, Daraga and all the towns in the first district of the province.