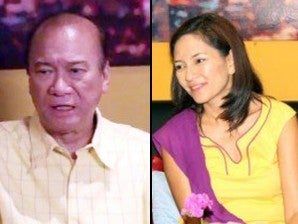 In the homestretch of the campaign, former Akbayan Rep. Risa Hontiveros and former senator Ramon Magsaysay Jr. broke into the list of candidates with a chance of winning a Senate seat, results of the latest Pulse Asia survey showed.

The nationwide survey, conducted from April 20 to 22, found both Hontiveros and Magsaysay tied in 12th to 17th places, on the strength of a 25.8-percent and 25.6-percent support from voters, respectively. Both are running under the administration-backed Team PNoy.

The noncommissioned survey used face-to-face interviews with 1,800 registered voters nationwide and had a margin of error of plus-or-minus 2 percentage points at the 95-percent level.

The only gainers in the winning circle were Grace Poe (Independent/Team PNoy), a former chair of the Movie and Television Review and Classification Board, and Hontiveros, who added 0.3 percentage point and 1.5 percentage points, respectively, to their previous ratings.

Pulse Asia said 11 candidates from Team PNoy and five from the United Nationalist Alliance (UNA) had a statistical chance of winning a Senate seat.

President Aquino said Team PNoy may have cemented its hold on nine of the Top 12 slots in the Senate race based on the latest surveys. But the President wasn’t giving up yet on his goal of a 12-0 sweep of the May 13 elections by his handpicked senatorial candidates.

In an interview after a dialogue with labor leaders in Malacañang, Aquino vowed to work even harder to campaign for Magsaysay, Hontiveros and Ana Consuelo Madrigal.

“The surveys seem to be consistent from the start (of the race)—9-3. (It) hasn’t changed. So (in the surveys) you will have a few movements, a few percentage points here and there, (but) a lot of them (the rest of Team PNoy) are in the margin of error,” said the President.

Asked if he was still confident that Hontiveros, Magsaysay and Madrigal would make it come May 13, Aquino said: “We will do everything we can to press for our candidates.”

He said he had been going around to campaign for the candidates and at the same time looking at government projects in the provinces.

Hontiveros and Magsaysay have been the subjects of a special push by the coalition after they failed to figure in the winning circle of previous surveys.

Among those in the winning circle, reelectionist Sen. Koko Pimentel (PDP Laban/Team PNoy) shed the biggest points in the latest survey.

Pimentel lost nine percentage points from 41.7 percent in March to 32.7 percent in April, slipping from fourth to 10th places to sixth to 12th places.

Legarda, who consistently dominated the surveys, got 51.5 percent (from 55.3 percent), landing her in the first to second places.

Escudero got 48.3 percent (down from 51.5 percent), enough to land him in a statistical tie with Legarda for first to second places.

Cayetano placed third to seventh (from second to third) with 40 percent, down from 48.7 percent.

He was followed by former Las Piñas Rep. Cynthia Villar (NP/Team PNoy) who got 37.7 percent (from 40.8 percent) and landed in fourth to ninth places (from fourth to 11th places).

Though only three of its senatorial candidates landed in the Magic 12 in the latest Pulse Asia survey, UNA said it was rival Team PNoy that was “in panic mode.”

Rep. Toby Tiangco, UNA campaign manager, said he had gotten word that the ruling Liberal Party was conducting a “loyalty check” among its local supporters amid reports that they would end up supporting the UNA ticket on May 13.

“They’re now panicking over at the LP,” he said.

“Loyalty checks are a sign of desperation and panic. They cannot control their leaders who are supporting UNA,” he added, citing the case of Albay Gov. Joey Salceda.

Salceda, an LP member, purportedly threw his support behind some UNA members when the coalition held a campaign sortie in his province last weekend.

The supposed move did not sit well with Team PNoy, particularly Magsaysay and Madrigal. The administration has been pitching for a 12-0 sweep, a goal UNA deemed unrealistic.

Tiangco said UNA candidates got the support of local officials belonging to the NPC in Regions 1, 2, 3, 6 and 7 and in Metro Manila.

The NPC has an alliance with LP for the senatorial race, but not necessarily at the local level.

Tiangco said many local NPC officials were “hurt” after the LP fielded candidates against them despite the alliance. “You won’t feel the hurt until you actually see the LP campaigning for your opponent,” he told the Inquirer by phone.

In Albay, Tiangco said the 12-0 objective was untenable, especially after local leaders allegedly “printed sample ballots with a 6-5-1 combination abandoning the 12-0 order of the administration party.”

“They are aware that sample ballots have already been printed. But they need to monitor if local LP leaders are carrying UNA candidates particularly Nancy (Binay), JV (Ejercito) and Jack (Enrile). That’s how paranoid and desperate the LP is,” Tiangco said.

Salceda denied the circulation of the sample ballots.

“This is an old practice, a political strategy engaged by some political supporters bent on pushing for their choice candidates,”he said.

Pulse Asia said registered voters were identifying an average of seven of their preferred senatorial candidates.

The pollster added that a little over one in every four Filipino voters, or 27 percent, had come up with a complete slate for the May 13 elections.