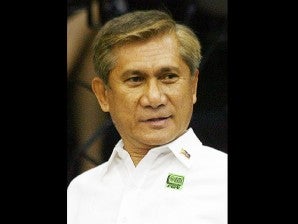 MANILA, Philippines – Lawyers of retired Armed Forces of the Philippines (AFP) chief of staff Roy Cimatu is eyeing the filing of a perjury case against AFP budget officer and whistleblower George Rabusa.

Cimatu and his lawyers on Thursday appeared before the Department of Justice (DoJ) to submit his counter-affidavit on the plunder complaint filed by Rabusa.

He said that among the documents included by Rabusa in his complaint was a signed document by Cimatu.

“We were able to establish that it is not his [Cimatu’s] signature in fact, we got a certification from the AFP attesting to the signature of General Cimatu based on the official files of the AFP,” Antonio said.

In his counter-affidavit, Antonio said they were showing the impossibility of the grand scheme alleged by Rabusa.

“There is no basis to establish a complaint or even an indictment of Gen. Cimatu,” Antonio added.

Cimatu is one of the more than 20 others accused by Rabusa of dipping their hands into the AFP coffers from 1994-2004.