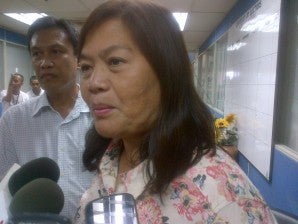 Sta. Rosa, Laguna mayoral candidate Alicia Lazaga files a disqualification case against her rival, incumbent mayor Arlene Arcillas, for alleged use of government property while campaigning as well as use of many bodyguards with high-powered firearms. PHOTO/MATIKAS SANTOS

MANILA, Philippines – A mayoral candidate of Sta. Rosa City, Laguna has filed a disqualification case before the Commission on Elections (Comelec) against her opponent for alleged “flagrant use of police bodyguards with high-powered firearms.”

Alicia Lazaga filed the disqualification complaint against her rival, reelectionist mayor Arlene Arcillas along with the barangay (village) chairman and several John Does, citing their violations of the Comelec’s gun ban.

Aside from the security personnel, Arcillas had also allegedly been using government vehicles during her election campaign activities, Lazaga said.

Lazaga told reporters in an ambush interview that the use of that many bodyguards with high-powered rifles was like an “act of terrorism.”

“Because of the many bodyguards of Arcillas, especially the Special Action Force (SAF) … in full battle gear … the people are filled with fear and are apprehensive in expressing their support for the other candidates,” Lazaga said in a statement accompanied by her complaint.

“Even before the start of the [local] campaign period they already started mobilizing and up to now we can see … all the properties of the government are being used for the campaign of my rival,” Lazaga told reporters.

According to Section 33 of Comelec resolution 9561-A, “During the election period, no candidate for public office, including incumbent public officials seeking election … shall employ, avail himself of or engage the services of security personnel bodyguards…”

The same section however states that “when circumstances warrant, including but not limited to threats to life and security of a candidate, he may be assigned by the Commission upon due application…”

Lazaga formerly ran for vice mayor in 1988 but lost. She is the founder and owner of the Child Formation Center school which was established in 1995.

She said she has no personal security.