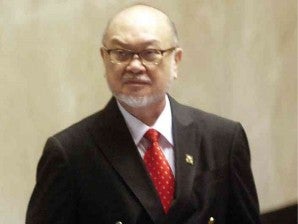 The Syjuco couple and two other respondents are accused of irregularities in the 2005 disbursement of P20 million from the Priority Development Assistance Fund of then representative Judy Syjuco through the Tesda and implemented by a nongovernment organization founded by her husband.

In a 35-page joint resolution issued on April 24, the antigraft body found probable cause against the couple; Santiago Yabut Jr., Tesda deputy director general for field operations; and Maria Nela Yniesta, president of Tagipusuon Cooperative, for violations of Republic Act No. 3019 (Anti-Graft and Corrupt Practices Act), according to a statement issued on April 26 by Edgardo Diansuy, director of the Ombudsman’s media affairs bureau.

Syjuco, who is seeking reelection as representative of Iloilo’s second congressional district, could not be reached for comment.

But in an earlier interview with the Inquirer, he accused the administration of political persecution and filing various cases against him to prevent his reelection.

President Aquino has openly endorsed Gorriceta in Syjuco’s district during campaign sorties in Iloilo. While not naming Syjuco, the President in his speeches lambasted the congressman for alleged corruption.

In its resolution, the Ombudsman found irregularities in the memorandum of agreement (MOA) between Judy Syjuco, the Tesda and Tagipusuon Cooperative for the Education For All Project implemented in Iloilo’s second congressional district.

The project, implemented under the Tesda’s Invigorating Constituent Assistance in Reinforcing Employment program, a scholarship-sharing scheme, involved funding and training assistance to elementary and high school students in the district.

But the antigraft body said the MOA and the project implementation gave “unwarranted benefit to Tagipusuon.”

“The action of these public officers resulted in clear undue injury to the government, considering that public funds were disbursed for purposes other than what it was appropriated for,” according to the ruling.

The Ombudsman cited a May 27, 2011, report of the Commission on Audit, which said that the project was “highly irregular” because it was beyond the Tesda’s mandate.

It noted that the Tesda’s mandate is to provide technical education and training to mid-level workers and not elementary and high schools students.

Tagipusuon was also unqualified to implement the project because its primary objective is to provide livelihood projects for women, according to the Ombudsman.