Robredo name not enough for Leni to win 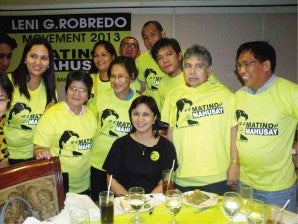 Lawyer Leni Robredo has to bring along the name of her late husband, Jesse M. Robredo, in her campaign, but even she is aware that it is not enough to win the congressional seat in Camarines Sur’s third district.

From being a low-profile partner of the longest-serving mayor of Naga City and interior secretary of the Aquino administration—a stint cut short when he died in a plane crash in Masbate last year—Leni, 48, has plunged into the unfamiliar world of politics.

She was reluctant about her election bid even after filing a certificate of candidacy (COC). “I was thrust into something I was not prepared for and into an arena I did not want to be a part of,” she said.

Were it not for internal kinks within the local chapter of the Liberal Party (LP) that threatened to divide members in the district, she was certain until the morning of Oct. 5, the last day of filing a COC, that she wouldn’t be running for any post.

The “problem” cropped up when former Solicitor General Joel Cadiz decided to file his candidacy for congressman in the third district even before the LP could announce that its standard-bearer would be Vice Mayor Gabriel Bordado, a close friend and political supporter of Jesse.

Leni said the party leadership thought she was the only one who could unify everyone and that if she did not do anything about it, it would mean defeat for LP candidates. A loss would mean allowing an existing political dynasty “to even expand and strengthen its reach,” she said.

At that time, she felt that filing her COC was what her husband would have wanted her to do. “Right now, I believe I made the right decision.”

After Leni was officially endorsed by the LP national directorate led by President Aquino and Interior Secretary Mar Roxas, Cadiz withdrew his COC for congressman and refiled it for governor.

Since then, there has been no turning back for Leni. The widow embraced the challenge, went around the district, consulted people and saw for herself the situation on the ground. These made her feel that there is a purpose and meaning to the immediate events in her life, such as the sudden death of her husband.

“I am being given this rare opportunity to continue the legacy that Jess left behind and to introduce his brand of leadership and the values he so strongly stood for,” Leni said.

She expected that a lot about her late husband would play out in her campaign as people would see her as his extension or someone to continue from where Jesse had left off.

But she thought it would not be enough as she had to introduce herself to the people and show them where she was coming from. “I am not just the wife of Jesse,” Leni said.

From among the five districts in Camarines Sur, the eight-town third district has the second largest voting population of some 242,000 spread in 186 barangays.

For the past nine years, the third district had been led by Rep. Luis R. Villafuerte, whose middle name, incidentally, is Robredo. He is an uncle of Jesse. In his first two terms, Villafuerte lost in Naga but finally won on his third term (2010) when it was Jesse’s last term to become mayor.

Leni said she is not just a lawyer but a longtime NGO (nongovernment organization) worker. For many years, she said,  she worked hard in communities, “helping empower the marginalized sectors in our communities.”

Among the localities in the third district, Naga has the biggest number of voters at 79,743, followed by the towns of Pili and Calabanga, Ocampo, Canaman, Magarao, Camaligan and Bombon. Only 9,381 voters are in Bombon.

Silvestre Bonto, a farmer leader in Calabanga, said community organizations like those of jeepney, tricycle and padyak (pedicab) drivers, and community-based groups of women and farmers had been tapped to support Leni’s candidacy.

Based on the Commission on Elections’ official list of candidates, it is only in Naga where Robredo’s widow is allied with an incumbent mayor. The LP, however, was able to field its mayoral candidates in the towns of Pili, Calabanga, Ocampo, Canaman and Magarao but failed to have candidates in Camaligan and Bombon.

Bonto said that against Robredo’s LP, the Nationalist People’s Coalition of rival Nelly Villafuerte is allied with the three reelectionist mayors of Canaman, Camaligan and Bombon. It has no mayoral candidates in Naga and Pili and fielded neophyte candidates in Magarao, Ocampo and Calabanga.

But Leni is facing a formidable challenge in terms of machinery and resources. Villafuerte is claiming that the majority of the mayors in the third district are his allies and that as congressman for nine years, he was able to implement P5 billion worth of projects there.

“I am surviving on all the goodwill Jesse left behind,” Leni said, acknowledging that getting resources had been most difficult for her. Her victory, she said, would prove that an election can also be won with very limited resources.

“Considering the many years of patronage politics they have experienced in their midst,” she said the people would not think in terms of resources and machinery.

If elected, Leni said she would push for the passage of laws to reform Congress, including scrapping the pork barrel, extending the term of legislators from three years to six without reelection, and the antipolitical dynasty law.