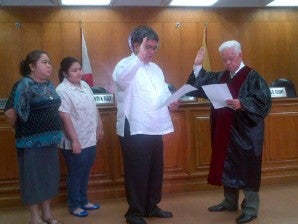 “Officially we are now six commissioners in the Comelec,” Brillantes said in a press conference after the simple ceremony.

He said that Guia will be joining them in their special en banc session Thursday.

Guia’s appointment was delayed for a short period when his papers from Malacañang misspelled his name as “Louie.”

With the corrected appointment papers, Guia said that “I can start my work effective immediately.”

He is the executive director of the Legal Network for Truthful Elections (Lente) at the time of his appointment.

When asked whether a replacement for him has been assigned, he said that it was already being finalized.

He said that he will still see his colleagues from Lente because it was working closely with Comelec.

He also said he will still see where he would be assigned by the Comelec en banc after their special session Thursday.

Guia’s wife and daughter were with him during the oath taking ceremony.