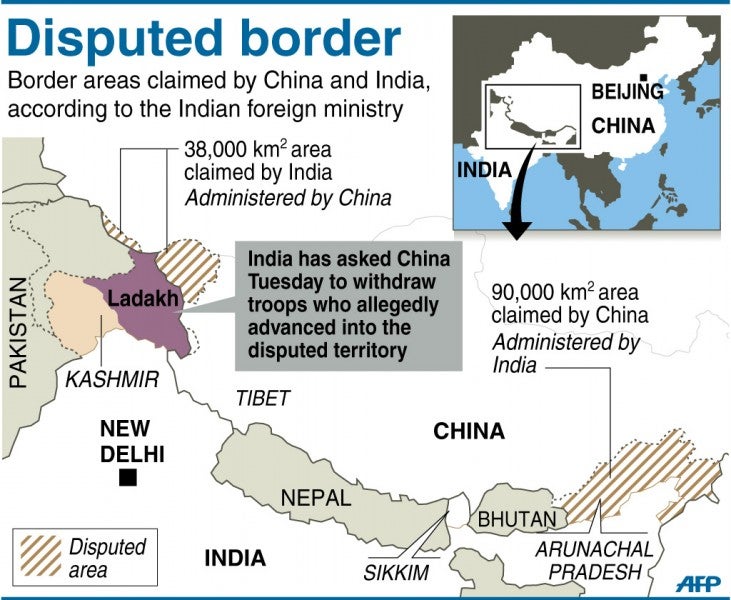 NEW DELHI—India’s foreign ministry said Tuesday it had asked China to withdraw troops who have allegedly advanced into disputed territory claimed by New Delhi in a remote area of the Himalayas.

“We have asked the Chinese side to maintain the status quo in this sector (of the western border),” spokesman Syed Akbaruddin told a first official briefing on the subject. “By this I mean the status quo prior to this incident.”

Akbaruddin added that the Chinese ambassador to New Delhi had been summoned over the alleged incursion on April 15, when a platoon of the People’s Liberation Army (PLA) is said to have advanced and erected a camp.

He stressed that there were differing perceptions of the undefined frontier in the Buddhist-majority Indian region of Ladakh which is a source of friction between the neighbors.

Mechanisms exist to resolve border problems peacefully and if troops were to come face-to-face “they shall exercise self-restraint and take all necessary steps to avoid an escalation of the situation,” he said.

Referring to denials in Beijing which dismissed Indian concerns as “speculation,” he added that the alleged violation was “not something that we have conjured up” and described it as a “face-to-face” situation.

China denied Monday that its troops had encroached on Indian territory or that they had contravened accords signed in 1993 and 1996 designed to maintain peace along the so-called Line of Actual Control (LAC).

Chinese foreign ministry spokeswoman Hua Chunying said Tuesday that “Chinese-Indian relations have been developing well” and added that both sides had “maintained good communication and cooperation on the border issue.”

A meeting between local commanders was underway to resolve the incident as Chinese troops continued to maintain their position on Tuesday in Dipasang, about 250 kilometers (155 miles) by road east of regional capital Leh, officials said.

“Nothing has changed since April 15. Everything is as it was then,” the local district commissioner whose administrative area covers the area, Tsering Angchuk, told AFP by telephone.

Tension at the border is a regular feature and the Indian press frequently reports on minor alleged violations by Chinese troops as well as the build-up of military forces and infrastructure in frontier areas of Tibet.

A report on The Times of India’s website referred to a “devious Chinese plot being exposed” on Tuesday and said two helicopters had also violated India’s airspace when the PLA troops advanced.

Relations between the giant neighbors are often prickly and marked by mutual suspicion—a legacy of a brief border war in 1962 that was waged in Ladakh and in the northeastern state of Arunachal Pradesh.

India’s The Hindu newspaper reported recently that Chinese Premier Li Keqiang was set to visit New Delhi next month as part of efforts to boost ties between the world’s most populous countries.

The apparent movement of Chinese troops is likely to add to concerns among China’s neighbors about Beijing’s respect for its current borders as a long list of regional troublespots lengthens.

It also has a territorial dispute with Japan over islands in the East China Sea, and the Japanese prime minister vowed Tuesday to “expel by force” any Chinese landing on the isles at the center of the row.—Adam Plowright