Pimentel worried by slip in surveys 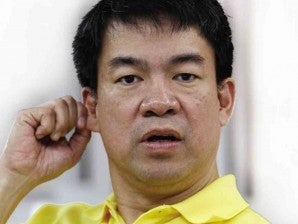 Pimentel has a reason to be worried. He lost the 2007 senatorial elections mainly because of vote-shaving in Maguindanao in the Autonomous Area of Muslim Mindanao (ARMM).

It was only Pimentel’s tenacity in pursuing an election protest before the Senate Electoral Tribunal (SET) that he was able to enjoy that last two years of what should have been a six-year term.

And now he fears that the same thing may be happening again.

At a gathering last Monday of members of his PDP-Laban party, Pimentel warned that his base in the south seems to be wearing away.

“I need your help… there must be a well-orchestrated attack against me in Mindanao,” he said, citing the results of the survey that he did not name.

“We cannot detect anything, we cannot explain it but if you notice something, please relay it to us right away,” he said.

“But after analyzing the regional presentations, my team noticed that I am suffering from double-digit losses among voters in the four Mindanao regions,” he told reporters.

He said the survey also showed that he still enjoyed relatively wide support, “even gaining more” in certain areas of the country.

Pimentel’s disclosure came on the heels of the release of the latest candidate preference survey of the Social Weather Station polling organization. From a rank of No. 5 to 7 with 47 percent in March, he fell to No. 7 to 8 with 43 percent in April.

From the beginning of 2013 until the start of the campaign period, Pimentel had been ranking 5th to 6th, with 48 percent.

Asked if he suspected anyone to be behind the drop in his numbers, the senator said he would not name anyone specifically until he gets information from the field.