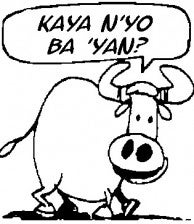 SURIGAO CITY—Business must be good for this mortician. He now owns his business and, since turning to politics, can even afford to raffle off his monthly salary as a public official to his constituents.

At 59, Nilo Aldonza is running in May for a council seat in Surigao del Norte, the lone politician in his province—and probably anywhere else—who seems to be happy giving away his salary to the lucky raffle winner.

He opposes political dynasties and stays in his post for only one term. Since entering politics, he has made sure none of his family members would seek public office.

As a city councilor in 1997 Aldonza decided to raffle off his salary. Since then, his constituents excitedly look forward to his pay day hoping to become the lucky person.

A former embalmer, Aldonza entered politics because of what he said was his desire to serve.

“It’s the quality of service that matters,” said Aldonza, who has just finished one term as a provincial board member.

Now, Aldonza is seeking a fresh seat at the city council—but for one term only, as with his previous positions. He did not seek reelection in 2010 so he still considers himself a “one-termer” only.

“Most politicians want to stay longer in office purportedly to serve better; dynasties field more and more family members because they believe that the more (of them in office), the better for the people,” Aldonza said at one of his funeral parlors, where he is known to entertain constituents when not engaged in official functions.

Aldonza believes “those who have stayed long in the same office are the ones who get easily corrupted.”

“Three years is long enough to get comfortable with government contractors and suppliers,” he said. “The temptation to do evil increases every day, so why stay longer?”

Fernando Almeda Sr., vice president of the civil society group Movement Against Dynasties for Mindanao, called Aldonza a “living example of public service” and said his one-term policy was “a condemnation of our dynasty-infested politics.”

“All politicians should be like him—disinterested in power or fortune but with a big desire to serve,” Almeda said.

He said if only politicians were service-oriented, high-impact projects could easily be achieved even in just one term. He cited as an example his hog dispersal project when he was a barangay councilor.

“It started in early 1990s and now the project’s still there, growing to several thousand head and the beneficiaries are still reaping profits until this day,” Aldonza boasted.

Mario Simorlan, a beneficiary of Aldonza’s project, said the project  “saved” his family during difficult times and helped send his children  to school. “I have known other beneficiaries who now have their own piggeries. It’s amazing how a small project can last through the years,” Simorlan said.

Aldonza said a politician should not just rely on patrons or on their internal revenue allotment funds. He said when he won as chairman of Luna village in 1995, he immediately scoured for funds outside the traditional sources.

He found help in grants from foreign governments and nongovernment organizations and from the prize money the barangay (village) won in national contests to fund his projects.

Luna, he said, is now a well-developed village with its own buildings and modern healthcare center.

“Public officials, especially in the barangays and municipalities, should be creative and innovative and not rely on trapos (traditional politicians) who are out to use them to enhance their chances in the next elections,” he said.

At the city council, Aldonza used his three years in office initiating various “low-capital, high-income” projects. One of these is a prepaid funeral plan scheme for the poor which, he said, has grown into a P500,000 cooperative.

The seed money for that project was only P5,000, he said.

He began as embalmer

Aldonza credits his life experience for the brand of politics he espouses.

Coming from a poor family, he said he worked as an embalmer for a relative’s funeral parlor to pay for college. Later, he worked as a clerk at a local cement company, rising to become the company accountant.

He left after 23 years to establish his own chain of funeral parlors in Surigao del Norte and Agusan provinces.

“I learned to divide my time (and) I learned to allocate my meager finances wisely,” he said, adding this had helped him in politics.

“Because voters see that I’m not out to remain in power till kingdom come, I’ve never lost an election, thank God,” he said.