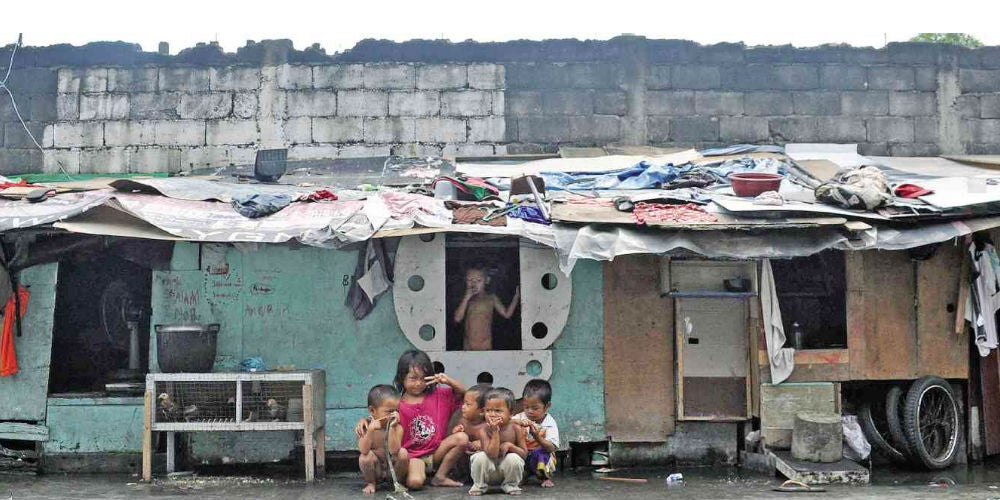 WHERE’S TRICKLE DOWN EFFECT? Despite the expansion of the economy, the benefits of growth are not trickling down to the poor, including these children living in shanties in Pasay City. INQUIRER PHOTO

Economic growth over the past six years hardly made a dent in poverty incidence in the Philippines, as the percentage of Filipinos living below the poverty line remained practically the same between 2006 and 2012, official statistics showed.

The poverty incidence stood at 27.9 percent in the first semester of 2012—“practically unchanged” from the same period in 2009 (28.6 percent) and in 2006 (28.8 percent), the National Statistical Coordination Board (NSCB) reported Tuesday.

Unlike in previous poverty reports, the NSCB did not indicate the number of families and people who fell below the poverty line.

Although the poverty incidence was practically unchanged in the past six years, the number of poor people was expected to be higher in 2012 because of the country’s growing population.

Norio Usui, senior country economist for the Asian Development Bank, said the government must solve the problem of jobless growth if it hoped to reduce poverty.

“I am not surprised at all. The benefits of strong economic growth have not spilled over to the people because they still cannot find a job,” he told Agence France-Presse in a telephone interview.

He said the Philippines’ economic model depended on consumption, strong remittances from its large overseas workforce and the business process outsourcing industry, which employs college graduates.

However, the country, with its weak industrial base, has stood out in the region, he  added.

“Why do you need a strong industrial base? To give jobs not only to the highly educated college graduates, but also to high school graduates,” Usui said.

The National Economic and Development Authority (Neda) said it hoped to see improved results given new investments in infrastructure, agriculture and manufacturing.

“Although this first-semester result on poverty incidence is not the dramatic result we wanted, we remain hopeful that, with the timely measures we are now implementing, the next rounds of poverty statistics will give much better results,” Socioeconomic Planning Secretary Arsenio M. Balisacan said at a briefing.

Balisacan said increased infrastructure and business investments since the latter part of 2012 should help create quality jobs that would enable the poor to improve their lives.

The country, which has a population of about 97 million, posted 6.6 percent economic growth last year, and this year obtained its first-ever investment-grade rating from Fitch Ratings.

However, the January 2013 jobless rate stood at 7.1 percent, with a further 20.9 percent underemployed, or working fewer than 40 hours a week.

About 41.8 percent of the underemployed are in the farming sector.

Joel Rocamora, head of the National Anti-Poverty Commission, said about three out of every five Filipinos were highly dependent on agriculture. “As such, increasing incomes in agriculture will make a big dent in addressing the poverty problem,” he said.

Balisacan said underemployment in rural areas, security problems in provinces facing insurgencies and warlords, and the falling price of a number of commodities such as sugar were mainly to blame.

“If the problem of visible underemployment in agriculture is addressed, then incomes of farmers would increase, poverty incidence would decrease, and we would not be compromising food security,” Balisacan said in a statement.

He expressed hopes that the next round of data would reflect the government’s massive investment in human development and poverty reduction.

NSCB Secretary General Jose Ramon Albert said at the briefing that during the first semester of 2012, a Filipino family of five needed P5,458 to meet basic food needs every month. Families earning that amount were considered to be living in “extreme poverty.”

A family of five family would need P7,821 to meet both food and non-food needs (such as clothing, housing, transportation, health, education) every month. Family earning that much is considered to be living in “poverty.”

The NSCB said P79.7 billion was needed to eradicate poverty for the first semester of last year. By contrast, the government 2012 budget for its conditional cash transfer program was P39.4 billion.

Neda said that while there was a slight difference in poverty incidence between the first semester of 2009 and 2012, the results were not uniform across regions and provinces.

“This suggests that the strong economic growth in 2010 and 2012 were not enough to extricate a lot of people from the poverty trap,” Dr. Benjamin Diokno of the University of the Philippines School of Economics said via e-mail.—With a report from AFP