Llasos vows to take the MRT, shuttle to work if he wins seat in Senate | Inquirer News
Close
menu
search

Llasos vows to take the MRT, shuttle to work if he wins seat in Senate 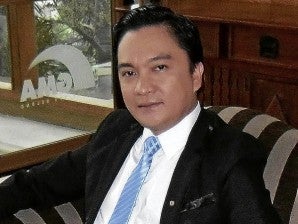 BAGUIO CITY, Philippines —- Senatorial candidate Marwil Llasos of the Ang Kapatiran Party introduced himself to students of Baguio on Thursday, emphasizing his simple beginnings as the son of a single mom, his growing up years in public schools, his entry into the UP College of Law and his career in law.

Dapper in a black suit, maroon shirt and a red tie in the 2nd Inquirer Senate Forum at the University of Baguio here on Thursday, the lawyer also made an effort to amuse his audience, composed mostly of students, with witticisms and lines from karaoke classics.

Responding to the question from Philippine Daily Inquirer columnist Rina Jimenez-David about what made him “special,” Llasos said his “ordinariness” made him special.  And he vowed to continue living the life of an ordinary Filipino by commuting to the Senate, should he win a Senate seat in the May elections.

He said he would not hesitate to ride jeepneys and tricycles, and when asked if he would use the special single-digit plate, numbered 7, for senators on his car, he answered by reciting the chorus of the Michael Learns to Rock (MLTR) song, “The Actor”: “I’m not an actor, I’m not a star/ and I don’t even have my own car.”

This earned him a loud approval in the forum’s first round.

Llasos admitted that he has always been a fan of MLTR, saying their songs have always spoken of the concerns of an ordinary man.

“Hindi ako sanay sa layaw (I am not used to luxury). On my first day in the Senate, I would take an MRT from Quezon City to Pasay… then I would ride with the [Senate] employees in the shuttle. I’m a layman, I have vows of poverty, chastity and obedience,” he said.

Aside from explaining Ang Kapatiran’s positions on issues like the reproductive health law and same-sex marriage, Llasos said he would like to address issues dealing with politics and the economy.

“When I face people, I am more interested in getting questions such as what I can offer [to improve] Philippine politics and the economy,” he said.

To ease the pressure from the campaign, Llasos said he liked to crack jokes whenever he joined other candidates. “We may disagree on issues but we are all here to contribute to [improve the] country,” he said.

He closed by thanking the INQUIRER and the other sponsors for giving him “a moment in time,” again alluding to another karaoke classic, “One Moment in Time” by the late Whitney Houston.

Read Next
‘If I win, that proves there’s a Catholic vote.’—Milagros Magsaysay
EDITORS' PICK
Pru Life UK receives four golden arrows for solid corporate governance
Speed up your game with the new vivo Y20s [G]
PH’s COVID-19 active cases reach over 190k after 12k new infections reported
Harry Roque in hospital for COVID-19 treatment
Pre-order the new vivo Y20s [G] to get a free TWS earphone
WHO says not to use ivermectin on COVID-19 patients
MOST READ
Stop ‘creeping occupation’ of ‘militia’ boats in WPS, Pacquiao asks China
Bea Alonzo clarifies status of her relationship with Dominic Roque
Convicted former aide of Sen. Bong Revilla dies — BuCor
Locsin to China: ‘Then move out’
Don't miss out on the latest news and information.