‘If I win, that proves there’s a Catholic vote.’—Milagros Magsaysay 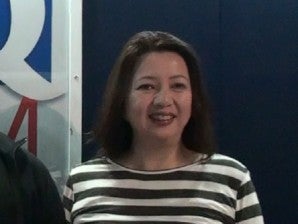 PANGASINAN, Philippines—The true test of a Catholic vote during the midterm elections will be the victory of a lawmaker who sees herself as some relatively unknown senatorial candidate.

“Nobody knows me. If I win, that proves that there is a Catholic vote,” Zambales Representative Milagros “Mitos” Magsaysay told reporters on Thursday.

A candidate of the United Nationalist Alliance (UNA), she said that she has observed how crowds at the opposition’s campaign rallies went silent as she approached the stage.

“When I start talking, they don’t know me but by the end of my speech I get cheers from the crowd. (You cannot tell me) that there is no conversion there,” she said.

Known for her feisty attitude representing Zambales in the House of Representatives, Magsaysay has brought her fiery speeches even as the opposition toured the country to court for votes.

She remained unfazed by taunts made by pro-Reproductive Health netizens, telling reporters that the so-called “purple vote” or the vote of supporters of the contentious RH Law made up very little of the voting population.

Magsaysay saw the Catholic vote as having bigger potential and maintained she was not worried about pro-RH supporters criticisms.

“If it is Senator Sotto (who is most criticized) in the Senate, I’m the most bashed at the House of Representatives,” she said.

The Zambales legislator has been endorsed by the White Vote Movement, led by El Shaddai leader Mike Velarde.

But this endorsement would be Velarde’s biggest challenge yet, said Magsaysay.

Five of them were part of the Magic 12, leaving Magsaysay as the lone bet being endorsed by the said movement who was outside the top 12 list.

“I’m the only one from outside that list. I’m sure this will be a challenge to Brother Mike,” she said.