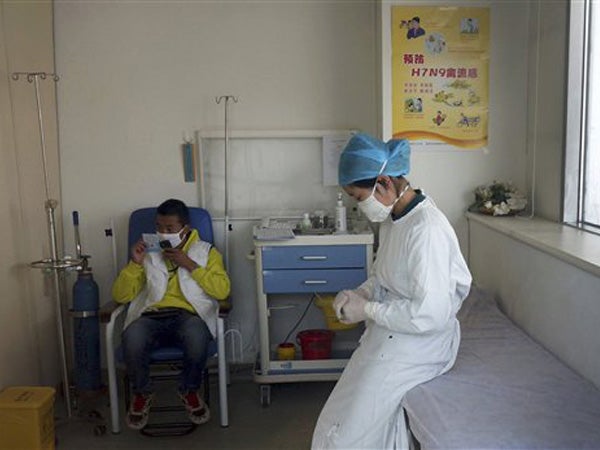 A nurse stays with a patient at a specialized fever clinic inside the Ditan Hospital, where a Chinese girl warded for the H7N9 strain of bird flu, in Beijing Saturday, April 13, 2013. The 7-year-old girl has become the first confirmed case in Beijing of the latest strain of bird flu virus, which has killed 11 and sickened 34 others in eastern China, officials said Saturday. AP

BEIJING – China’s H7N9 bird flu virus spread to a new province on Sunday, with state media reporting two human cases in central Henan just west of the area where the disease has been centred.

Until Saturday, when one case was reported in the capital of Beijing, all other instances had occurred in the eastern city of Shanghai and nearby Zhejiang, Jiangsu and Anhui provinces hundreds of miles (kilometres) away.

Altogether 51 people have been infected and 11 have died of the disease since Chinese authorities announced two weeks ago they had found H7N9 in humans for the first time.

Experts fear the prospect of such viruses mutating into a form easily transmissible between humans, which would have the potential to trigger a pandemic.

But the World Health Organization (WHO) said last week there was as yet no evidence of human-to-human transmission of H7N9.

Health authorities in China say they do not know exactly how the virus is spreading, but it is believed to be crossing from birds to humans, prompting mass poultry culls in several cities.

The United Nations’ Food and Agriculture Organization has said H7N9 shows “affinity” to humans while causing “very mild or no disease” in infected poultry, making it more difficult to find the source of transmission.

In 2003 Chinese authorities were accused of trying to cover up the outbreak of Severe Acute Respiratory Syndrome, which went on to kill about 800 people worldwide.

But China has been praised for transparency over H7N9, with the WHO saying it was pleased with the level of information sharing and US scientists congratulating it for “the apparent speed with which the H7N9 virus was identified” in a New England Journal of Medicine article.

China has said it expects to have a vaccine ready in seven months but in the article the US experts said developing one could take “many months”.