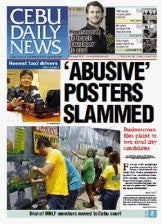 Fed up with campaign posters covering his fence, a businessman in Cebu City filed a complaint against two candidates from rival camps whose smiling faces invited legal action.

Dennis Maravillas of barangay Carreta said the posters were “irresponsible, abusive and shameless.”

“There was no consent from me or any of my personnel authorizing them to place the posters on the fence and gate of my truck yard. They covered about 70 percent of the entire fence and gate,” said the April 8 letter complaint to the Commission on Elections (Comelec) city office.

The complaint triggered an apology and sent crews from both violators to the site to start removing the posters.

“I would like to ask the owner’s forgiveness,” said Alvin Arcilla, candidate for city councilor of the Bando Osmena- Pundok Kauswagan (BO-PK).

Jerry Guardo of Team Rama sent his workers to the site in J. de Veyra Street yesterday to start removing the vote-for-me posters.

The businessman’s complaint, which included photos of the clutter on his fence, is the first one in Cebu City after weeks of Comelec warnings about the risks of illegal campaign material, and reminders not to attach posters to trees, plants and public areas outside of official designated poster areas.

He said the penalty for unlawful election propaganda is like that of a violation of the election gun.

“This is punishable by six months to one year in prison without any probation,” he told Cebu Daily News aside from possible disqualification.

At first Guardo said he had to check if the posters were really plastered by his supporters, saying opponents sometimes post them “just to destroy my image”.

He said he was being singled out “when there are many other candidates posting their materials anywhere.”

Meanwhile, Arcilla said that supporters told him they saw posters of the opponent already there on the wall, and didn’t want Arcilla to be left out in the exposure.

Under the law, however, it doesn’t matter if the candidate ordered the posters put up or not.

“It will be presumed that the candidates and parties caused the posting of campaign materials outside the common poster areas” if they don’t remove them within three days from notice sent by the local election officer, according to Comele Resolution No. 9615.

Those who post unlawful election material “shall be liable together with the candidates and other persons who caused the posting” under implementing rules of the Fair Elections Act.

At 3:45 p.m. Maravillas sent a text message to Cebu Daily News to say that most posters were removed but that 30 percent of Guardo’s posters were still on his gate.

“As long as all posters are removed by Saturday, I have no other concerns,” he wrote earlier in his letter.

The businessman also demanded that any damage caused by the removal of the posters would have to be repaired.

Candidate Arcilla, in an interview, said he was ready to compensate the businessman: “If the amount is reasonable, I’m very willing to settle the case.”

Edwin Cadungog, the new north district election officer, issued notices to both candidates to remove the posters within three days.

Lambino of the Comelec commended the private citizen’s response to the campaign litter.

“We really admire him for doing this. This is what is meant by citizen’s action. This is not just the job of the Comelec. We have to help each other,” said Lambino.

Arcilla said the violation taught him a lesson — about not wasting election expenses.

The 2 feet by 3 feet tarpaulins cost at least P60 each.

He said the spirit of competition sometimes gets the better of supporters.

“If you were the candidate, it’s very difficult to see everyone else putting up posters and then just stand by and not do the same,” said Arcilla.Chief of Reporters Doris Bongcac, Correspondents Edison delos Angeles, chito Aragon