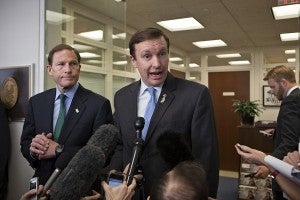 WASHINGTON – Senators struck a hard-fought compromise Wednesday that could expand US background checks to all commercial firearms sales, which may result in the most ambitious change to gun laws since 1994.

The deal comes four months after a massacre at Sandy Hook Elementary School in Connecticut, which left 20 young children and six adults dead and took America’s epidemic of gun violence to an alarming new level.

“We have an agreement… on an amendment to prevent criminals and the mentally ill and insane from getting firearms,” said Democrat Joe Manchin, from the pro-gun state of West Virginia, as he unveiled the measure.

The amendment would see background checks — the core of President Barack Obama’s gun control push — expanded to include all sales at gun shows and on the Internet, said Manchin and Republican Pat Toomey, the deal’s architects.

Despite falling short of the president’s proposal for universal background checks, Obama noted the “significant bipartisan progress” of the compromise while warning that much work remains.

“Congress needs to finish the job,” the president said.

Michelle Obama also got involved, making an emotional appeal for fresh legislation in murder-plagued Chicago, her hometown, likening the situation in some of the city’s neighborhoods to a war zone.

Recalling the shooting death of 15-year-old Chicagoan a week after she performed at Obama’s second inauguration, the first lady said: “Hadiya Pendleton was me, and I was her.

“But I got to grow up, and go to Princeton and to Harvard Law School, and have a family and the most blessed life I could imagine. And Hadiya… we know that story.”

Some Republicans discount the gun control compromise as a non-starter, but Democrats are focusing on rival lawmakers they believe can still be persuaded.

Toomey, from Pennsylvania where many rural communities support gun rights, appeared to poke a hole in the argument that any new gun control measures should be viewed as an infringement of the constitutional right to bear arms.

“I don’t consider criminal background checks to be gun control,” said Toomey, who like Manchin is a gun owner and hunter.

“It’s just common sense. If you pass a criminal background check, you get to buy a gun.”

Their amendment, aided by Republican Mark Kirk from Illinois, stops short of the universal background checks sought by Obama in the aftermath of Sandy Hook.

Specifically, it would not affect person-to-person sales, such as those between relatives. But it would strengthen existing law, which currently only requires background checks when guns are purchased from a licensed dealer.

Toomey also sought to ease worries that the background checks could lead to a national registry of gun owners, saying the proposed legislation “does not require record-keeping by any private citizens.”

The Senate Democratic leadership has already introduced a three-part bill that would require expanding background checks to virtually all gun sales, make gun-trafficking a felony, and boost funding for school safety.

Majority Leader Harry Reid has scheduled a procedural vote Thursday for the overarching bill, to which the Manchin-Toomey amendment would be attached.

A group of 13 Senate Republicans vowed to obstruct the broader bill, but by late Tuesday that effort was weakening, with other Republicans signaling they would vote for moving ahead.

Republican backing for any gun legislation is crucial for the measures to pass Congress, especially the Republican-led House.

The National Rifle Association issued a statement on Wednesday saying that “expanding background checks at gun shows will not prevent the next shooting, will not solve violent crime and will not keep our kids safe in schools.”

Stronger background checks enjoy sweeping public support, with polls showing about nine in 10 Americans in favor. Such a step is seen as more viable than an assault weapons ban and limits on high-capacity magazines.