Death toll at 37 as Iran wraps up quake rescue 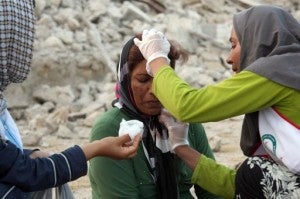 An Iranian woman receives medical treatment from aid workers in the town of Shonbeh, southeast of Bushehr, after a powerful earthquake struck near the Gulf port city of Bushehr. The 6.1 magnitude quake killed at least 30 people and injured 800 but Iran’s only nuclear power plant was left intact, officials said. AFP PHOTO

TEHRAN—Rescuers Wednesday wound up operations after pulling 20 people from the rubble of an earthquake that struck near the port city of Bushehr, killing 37 people but sparing Iran’s sole nuclear power plant.

“With the rescue operation being wrapped up no one is left under the rubble,” the Fars news agency quoted the head of Iran’s Red Crescent rescue corps, Mahmoud Mozafar, as saying.

According to latest media reports, 37 people were killed and 850 others injured in the 6.1 magnitude quake that struck on Tuesday.

At least 20 people were rescued from the rubble, according to Fars, which added that some 700 homes had been destroyed.

Mozafar said efforts were now focused on relief operations and around 1,000 tents had been set up in quake-hit areas.

Fars said blankets and food have also been sent to stricken areas.

Iran said it had informed the International Atomic Energy Agency that there has been no damage to the nuclear power plant in Bushehr, nearly 90 kilometers (55 miles) northwest of quake’s epicenter, and no radioactive release.

Iran’s atomic chief Fereydoon Abbasi Davani said that the power plant was not operational when the quake struck as it was ” under maintenance”, Iranian media reported.

The facility’s chief engineer, Mahmoud Jafari, told Arabic-language Al-Alam television that “no operational or security protocols were breached” by the quake.

The nuclear power plant in Bushehr, a long-delayed project finished by Russia, is yet to become fully operational.

Tuesday’s quake coincided with Iran unveiling a uranium production facility and two extraction mines in centre of the country.

Iran is at loggerheads with world powers over its development of a controversial nuclear program, which the Western and Israel suspect is aimed at military objectives despite repeated denials by Tehran.

The 6.1 magnitude quake hit at 4:22 pm (1152 GMT) on Tuesday at a depth of 12 kilometers (7.5 miles), in the area of Kaki, according to the Iranian Seismological Center which has registered more than a dozen after shocks, the strongest at 5.3 magnitude.

The US Geological Survey, which monitors quakes worldwide, ranked the quake at a more powerful 6.3 magnitude.

In Dubai, hundreds of kilometers down the Gulf from Bushehr and home to the world’s tallest building, Burj Khalifa, local media reported that several high-rise buildings were briefly evacuated.

Iran sits astride several major fault lines and is prone to frequent earthquakes, some of which have been devastating.

A double earthquake, one measuring 6.2 and the other 6.0, struck northwest Iran in August last year, killing more than 300 people and injuring 3,000.

In December 2010, a big quake struck the southern city of Bam. It killed 31,000 people — about a quarter of the population — and destroyed the city’s ancient mud-built citadel.