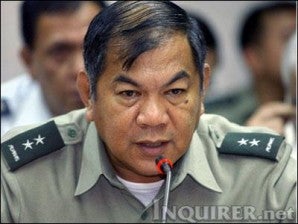 MANILA, Philippines—The Sandiganbayan stood pat in its ruling affirming the plea bargain deal between former Armed Forces of the Philippines Comptroller Carlos Garcia and the Office of the Ombudsman.

In its 73-page joint resolution promulgated Wednesday, April 10, the anti-graft court’s Special Second Division through Associate Justice Samuel Martirez dismissed the motion filed by government lawyers, through the Office of the Solicitor-General to intervene.

“Wherefore, for utter paucity of merit, the motion for reconsideration to allow the Office of the Solicitor General to intervene is hereby denied,” the anti-graft court said.

“Correspondingly, for lack of legal personality/authority to intervene in this case and considering further that the plea bargaining agreement is in accord with law and jurisprudence and is for the best interest of the government, the prayer of the Office of the Solicitor General to set aside the plea bargaining agreement is also denied,” the joint resolution stated.

Under the deal, Garcia entered a “guilty plea” to a lesser offense of direct bribery instead of plunder in exchange for returning over P135-million worth of assets.

In its May 4, 2010 resolution, the Sandiganbayan ordered Garcia to turn over to the government all ownership on any and all interest which he and his family owns which are subject of the plunder and the Anti-money laundering case.

A year later, the anti-graft court approved the plea bargain after Garcia was able to turn over P135-million worth of properties.

The government insisted that the Ombudsman should have consulted the aggrieved party first, in this case, the Armed Forces of the Philippines (AFP) whose funds were allegedly misappropriated by some erring officials.

The plea bargain deal was inked during the time of Ombudsman Merceditas Gutierrez. It has become part of an impeachment complaint against her. Gutierrez resigned from her post.