Gordon: ‘I am not immodest. I just teach people to be assertive’ | Inquirer News
Close
menu
search

Gordon: ‘I am not immodest. I just teach people to be assertive’ 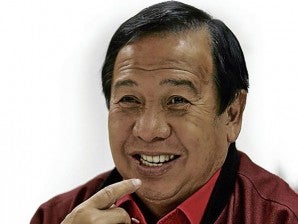 MANILA, Philippines — Former senator Richard Gordon’s patience will be tried in the Senate should he be re-elected in May – a characteristic that he admits he has little to spare.

In a three-part forum for senatorial candidates hosted by the Philippine Daily Inquirer at the University of the Philippines in Diliman, the United Nationalist Alliance (UNA) candidate said he found that the most trying in the tasks of a senator was to be patient, what with the “long debates without focus, many privilege speeches, and investigations in aid of re-election and not legislation.”

He said that it was unfortunate that many of his colleagues as a former senator “drag their feet, while away their time.”

This should not be the case, asserted Gordon who said that senators should serve “as the representatives of the people.”

The opposition bet also insisted that he was not “immodest” when told by forum moderator, economist and Inquirer columnist Cielito Habito that modesty was not a trait Gordon was known for.

“I am not immodest. I just teach people to be assertive,” said Gordon.

Inquirer will hold two other fora on April 18 in Baguio and on April 26 in Cebu.