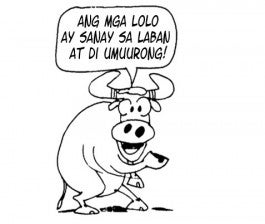 Don’t be too quick to count us out.

“Older people have patience, have intelligence and have experience,” senatorial candidate Ernesto Maceda said in a television interview after the host pointed out that he was the oldest among those running for the Senate in the May 13 midterm elections.

Speaking at the GMA News Paninindigan forum scheduled to be shown Sunday night, the 78-year-old candidate of the United Nationalist Alliance (UNA) said he could still keep up with the best of them, boasting he does not tire in sorties despite having to travel in different provinces for five successive days.

Maceda said septuagenarians could still make their mark in the legislature and that he shouldn’t be disregarded as a candidate just because he was older than many of the other aspirants.

Older people have a lot of good qualities, Maceda said, pointing out that Senate President Juan Ponce Enrile has been tireless and excels in his job at the Senate despite his age.

“He has the best performance [among the senators],” Maceda said.

About half of US senators are also elderly, he further said.

Maceda disclosed during the forum that he was in favor of giving Marcos a heroes’ burial.

“Under the law, as a former President and as a former military officer, he’s entitled to be buried in Libingan ng mga Bayani,” he said, adding that it was time to resolve the long-festering issue.

Maceda also believes the Presidential Commission on Good Government (PCGG) should be abolished and that its task of recovering the Marcoses’ supposedly ill-gotten wealth should be transferred to the Department of Justice.

He said the PCGG had been in existence for over two decades and had yet to recover about 60 percent of that wealth.

“I think we are the best public servants because we serve only the country and our people,” the 76-year-old Montaño said at the forum.

He said that military personnel were not trained to favor the interests of big business.

Montaño, who is running as an independent, is the former chief of the defunct Philippine Constabulary-Integrated National Police. He also served as an undersecretary at the Department of the Interior and Local Government and was a presidential adviser for political affairs.