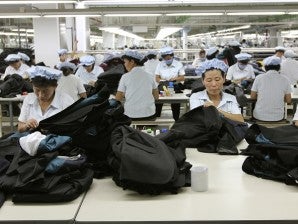 SEOUL — Foreign diplomats in Pyongyang were considering a North Korean evacuation advisory Saturday as concerns grew that the isolated state was preparing a missile launch at a time of soaring nuclear tensions.

Bulgaria said the heads of EU missions would meet to hammer out a common position after Pyongyang warned embassies it could not guarantee their safety if a conflict broke out and that they should consider leaving.

Most of their governments made it clear they had no immediate plans to withdraw personnel, and some suggested the advisory was a ruse to fuel growing global anxiety over the current crisis on the Korean peninsula.

“We believe they have taken this step as part of their country’s rhetoric that the US poses a threat to them,” a British Foreign Office spokeswoman said in London.

A South Korean government official agreed, saying it was part of a “propaganda war to dump responsibility for instability on the peninsula on the US”.

The embassy warning Friday coincided with reports that North Korea had loaded two intermediate-range missiles on mobile launchers and hidden them in underground facilities near its east coast.

“The North is apparently intent on firing the missiles without prior warning,” the South’s Yonhap news agency quoted a senior government official as saying.

They were reported to be untested Musudan missiles which are believed to have a range of around 3,000 kilometres (1,860 miles) that could theoretically be pushed to 4,000 kilometres with a light payload.

That would cover any target in South Korea and Japan, and possibly even reach US military bases located on the Pacific island of Guam.

The White House said Friday it “would not be surprised” by a missile test.

“We have seen them launch missiles in the past… And it would fit their current pattern of bellicose, unhelpful and unconstructive rhetoric and actions,” White House spokesman Jay Carney said.

The Pentagon warned it would be “a provocative act”, with spokesman George Little urging Pyongyang to “follow international norms and abide by their commitments”.

The North has no proven inter-continental ballistic missile capability that would enable it to strike more distant US targets, and many experts say it is unlikely it can even mount a nuclear warhead on a mid-range missile.

Nevertheless, the international community is becoming increasingly skittish that, with tensions showing no sign of de-escalating, there is a real risk of the situation spiralling out of control.

The latest expression of concern came from Communist icon Fidel Castro, who warned the danger of a nuclear conflict erupting was higher than it had been at any time since the 1962 Cuban missile crisis.

If war broke out on the Korean peninsula “there would be a terrible slaughter of people”, Castro wrote in a front-page article in Granma, the Cuban Communist Party’s newspaper.

The United Nations said it had no plans to pull staff out after the North Korean warning message to embassies and NGOs in Pyongyang.

According to the British Foreign office, embassies and organisations were told to inform the Pyongyang authorities by April 10 what assistance they would require should they wish to evacuate.

“Our understanding is that the North Koreans were asking whether embassies are intending to leave, rather than advising them to leave,” the spokeswoman said.

Russian Foreign Minister Sergei Lavrov said Moscow was consulting with China over the warning, as well as the United States and other members of the stalled six-party talks on North Korea.

The New York Times reported that US President Barack Obama had called China’s new president Xi Jinping as part of ongoing efforts to get Beijing to bring Pyongyang to heel.

North Korea refused on Saturday to lift a ban on South Koreans accessing their companies in a joint industrial zone on the North side of the border.

Entry to the Seoul-funded Kaesong complex has been barred since Wednesday.