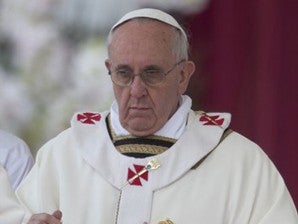 VATICAN CITY – Pope Francis has given his first pronouncement on the Catholic Church’s pervasive paedophile priest scandal, urging Vatican disciplinarians to act “with determination” against the scourge.

Meeting on Friday with Monsignor Gerhard Ludwig Mueller, the head of the Vatican department that disciplines predator priests, the pope asked him to “act with determination in cases of sexual abuse,” the Vatican said in a statement.

It was the first official word on the issue from the new pope, who was elected March 13 to succeed Benedict XVI whose papacy was marred by relentless paedophilia scandals with tens of thousands of victims over several decades.

The statement noted that the policy followed “the line established” by Benedict, who was the first pope to apologise to victims and called for zero tolerance against sexual abuse by priests.

Francis asked for “stepped-up measures to protect minors and help those who were subjected to such violence in the past.”

Also in line with his predecessor, Francis reminded the heads of national Catholic churches around the world that they had committed to formulating and implementing directives for addressing the problem — including turning abusers over to local law enforcement.

Mueller’s Congregation for the Doctrine of the Faith published in May 2011, a document ordering bishops to turn in members of the clergy suspected of paedophilia and to prevent them from working in settings involving minors.

It gave the bishops’ conferences one year to come up with guidelines on combating the crimes and cooperating with police.

As of September 2012, three-quarters of the national churches had complied, according to Monsignor Charles Scicluna, the Vatican “prosecutor” in sex abuse cases.

The scourge of abusive priests burst into the spotlight more than a decade ago with a cascade of scandals rocking the Catholic Church worldwide, from Ireland to the United States and Australia to Benedict’s native Germany.

The Vatican says it continues to receive around 600 claims against abusive priests every year, many of them dating back to the 1960s, 1970s and 1980s.

Sexual abuse by priests has often been coupled with cover-ups by their superiors, typically by transferring them to other parishes.

In Latin America, Francis’s home region, the most notorious scandal concerned the Mexican founder of the conservative Legionnaires of Christ congregation, Marcial Maciel, who was accused of sexually abusing children before he died in 2008.

SNAP, a vocal support group for victims, reacted immediately to Friday’s statement, demanding that the pope match words with actions.

“We can’t confuse words with actions,” said the Survivors’ Network for those Abused by Priests.

“Kids won’t be helped by a ‘continuation’ of the tiny symbolic gestures taken by Pope Benedict,” it said. “Kids will be helped by decisive changes. Thus far, Pope Francis hasn’t even discussed, much less adopted, even a single reform.”

SNAP, which has asked the International Criminal Court to prosecute Benedict for crimes against humanity, has demanded that the Church publish the names of predator priests on the Internet.

Also on Friday, the Vatican announced a donation of $50,000 by the new pontiff to help flood victims in his native Argentina, where at least 59 people have died in the record rains and flooding.

Vatican envoy Emil Paul Tscherrig said Francis “wants to express in this concrete manner his spiritual closeness with all those who suffer and those who are generously offering their help and support.”

And Francis will hold his first meeting with UN Secretary General Ban Ki-moon on Tuesday to “discuss the continuing cooperation between the United Nations and the Holy See,” the UN chief’s spokesman Martin Nesirky said.