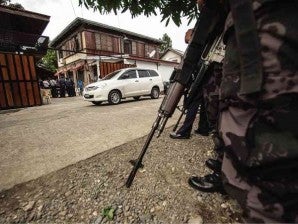 A HEAVILY armed police officer stands guard at the house of an Abra political candidate in January, when political families volunteered to surrender or to have police muzzle their licensed weapons to prevent violence during the midterm election campaign. RICHARD BALONGLONG/INQUIRER NORTHERN LUZON

One of the possible violations is a campaign jingle, written in Ilocano, that had offended an incumbent Abra official.

The families were asked to confront their concerns about the local campaign in a “conflict and mediation diffusion” session before lingering anger escalated into full-blown conflict during the elections, said Chief Supt. Benjamin Magalong, Cordillera police director.

They discussed cases of vote buying and intimidation during the campaign, and traded barbs about their leadership skills. The families ended their quarrel by renewing their commitment to keep the elections peaceful on May 13.

Abra has become notorious for violence and politically motivated attacks during election season.

“Everybody was expecting an agreement but [conflicts] could not be resolved in one sitting. You could see that these politicians have so much animosity from way back but they share the same goal for a peaceful Abra. They all did not want a violent election,” Magalong said.

But mediators had to first endure heated exchanges between the families, particularly after the Bersamins questioned the propriety of a Luna campaign jingle that had offended them.

Sang to the tune of novelty song, “Totoy Bibo,” a stanza of the jingle was sung this way: “Idi ubing ka pay/Sinuruan na kan lolom agtakaw…. naglaing, naglaing ka agtakaw (When you were young/You were taught by your grandfather how to steal… now, you’re so good at stealing).”

The jingle does not mention names but Bersamin said it violates a provision in the covenant, which says that the candidates agreed not to hurl personal attacks at one another.

Magalong said his office had consulted the Commission on Elections about the jingle to determine if the Luna family had violated the election law.

The Luna family said the jingle’s lyrics referred to all “corrupt politicians.”

Bersamin also reacted to a statement made by Hans Luna on the governor’s brother, the late Abra Rep. Luis Bersamin Jr., who was murdered in front of a Quezon City church in December 2006.

Bersamin said: “We are relatives but because of politics we behave this way. It hurts me that there is so much animosity in the family.”

“We need this mediation [session] because politicians here need to communicate [and its absence has led to] too much violence during the elections. I was a victim of ambush before but I never retaliated,” said Mayor Luna.

Magalong said the families agreed to talk to their supporters and instructed them not to resort to violence, threats and intimidation.

“If Abra is not listed as a hot spot this year, it’s going to be a victory for the province,” he said.