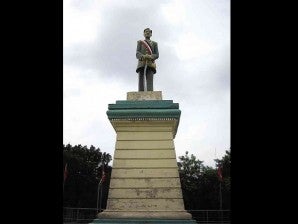 A STATUE of Leon Kilat in his hometown in Bacong, Negros Oriental. The remains of the hero were later interred at the base of the monument in the 1920s. During the revolution, the Spaniards, pro-Spanish Cebuanos and foreigners sought refuge at Fort San Pedro in Cebu City while waiting for reinforcement to arrive from Manila. PHOTO BY Trizer Mansueto

CEBU—He may not be considered in the league of the country’s renowned national heroes such as Jose Rizal and Andres Bonifacio. But there is one Visayan hero who fought for the nation’s independence from Spain with the same vigor and passion.

Pantaleon Villegas,  known as Leon Kilat, led a group of Cebuano Katipuneros in attacking the Spaniards on April 3, 1898, in what is now known as the Battle of Tres de Abril.

Leon and the Katipuneros  succeeded in forcing the Spaniards to seek refuge at Fort San Pedro and took control of Cebu for a few days.

Unfortunately, Leon was killed five days later, not by a Spaniard, but by an aide who was scared of Spanish reprisal.

But Leon’s story is not often told. In the anniversary of the attack and his subsequent death on April 3 and April 8, it is timely to recall the heroism of Leon Kilat.

While the revolution started in Manila in August 1896 and had spread like wildfire among several Luzon provinces, it  didn’t reach Cebu until mid-1897.

With the help of a Tagalog Katipunero who was dispatched to Cebu, a local chapter was formed in Cebu City in June 1897, participated in mostly by the workers of San Nicolas town.

While waiting for the designated official to start the revolution, the local Katipunan chapter silently recruited members.

Leon Kilat, 24, was the designated leader of the local chapter.

Although a non-Cebuano, Leon was familiar with Cebu and had several friends here since, prior to working in Mania, he found a job in the city for a few years.

Before leaving for Manila, Leon worked in the stable for horses of Federico Laing.

Leon was recruited by the Katipunan in Manila where he was believed to have earned his “kalake” or supernatural powers. Besides wearing talismans, he was known to be a “kublan,” which rendered him immune to bullets and other weapons.

In the late 1897, the Spanish governor of Cebu, Gen. Adolfo Montero, took up several measures to prevent the infiltration of the Katipunan in the province after he heard that some Katipuneros had arrived here.

To counter the perceived menace, the Spaniards organized local loyal volunteers in different towns to nip the secret organization in the bud. 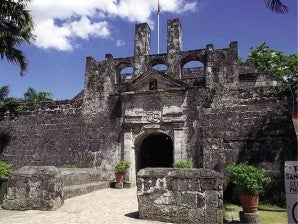 Threatened, the local Katipunan chapter decided it was time to wage war with the Spaniards.

With enough number of members and sympathizers especially among the prominent local leaders of San Nicolas, the Katipuneros clandestinely met to plan.

In February or March of 1898, the much-awaited leader—Leon Kilat—had arrived. After making several consultations with the local leadership, Leon Kilat agreed on a date to hold the revolt—April 8.

This date was auspicious, so they thought, since the Spanish troops would not be bringing their arms with them while filing for the Good Friday procession on that day.

It was to be the only day of the year that the Spanish troops would not be on their guard and therefore would be just like sitting ducks.

But things didn’t go as planned.

While in the thick of preparations, the Spanish authorities became suspicious, and the plot was discovered. Several arrests were made thereafter.

But the die was cast.

After the execution of a few ringleaders and the arrest of several men, the members of the Cebu Katipunan would have to stage the revolt immediately before it fizzled out.

While the Spaniards and their respective families had evacuated to Fort San Pedro, most city residents fearfully stayed within the confines of their homes.

According to a reconstruction of the events published in the prewar newspaper “Ang Freeman” in 1929, “Leon, brandishing a sword, led his brothers.”

They didn’t have to wait for Good Friday anymore. The Spaniards immediately dispatched soldiers to San Nicolas at 3 p.m. “The troops, … led by Capitan Mampor,” loaded their rifles ready for combat.

Recognizing the rebels, the leader of Spanish troops ordered the attack. “The revolt was lit; the moment has come. Don Leon shouted ‘Brothers, forward!’ He unsheathed his sword and prepared his spears. The Spaniards, who, for the longest time, was used to seeing the Cebuanos stoop down and even feared to stare at his master, didn’t expect that he would rebel with puny arms and any experience in fighting.”

The revolt spread to other Cebu towns but before the Katipuneros were routed, they also showed the Spaniards that although they were ill-prepared, they too were capable of inflicting damage on them.

Meanwhile, those who sought refuge at  Fort San Pedro may have felt safe inside the bastion but the Tres de Abril revolt was a lesson for the abusive colonial masters.

In fact, while waiting for reinforcements to arrive, those inside the fort suffered thirst and starvation.

Everyone, whether official or ordinary Spanish citizen, pro-Spanish Cebuanos or even prayerful friars, suffered not only discomfort but also fear because each one had been placed on rotation to act as a sentinel on guard lest the stone fort was overrun by their enemies.

It was unfortunate, however, that a few days after April 3, Leon Kilat was assassinated by Cebuanos who feared Spanish reprisals while he was seeking refuge in Carcar town.

To carry out their grim plan, the leaders of Carcar had Leon drink to the point of losing his senses before they removed his talismans so that they would succeed in liquidating him.

Worse, the assassination of the leader of the revolution was carried out by his treacherous aide, Apolinario Alcuitas.

While Leon was dying, his body was dragged to the town plaza where the townsfolk cheered: “Viva España!”

Leon Kilat had become a martyr for the cause of his people. It was April 8, 1898.

But then, despite his early demise at 24, Leon Kilat, “the man who was as fierce as a lion and as quick as a lightning bolt” had become a legend in the anti-Spanish revolution in Cebu.